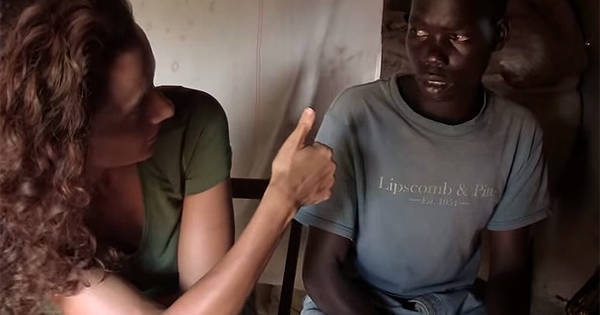 Patrick’s distress and sheer hopelessness pour out of his sullen face. He sits, cowered on his chair, while his father and a documentary maker talk openly about him.

15-year-old Patrick Otema does not understand their conversation, because he was born profoundly deaf. And because he lives in a remote part of Uganda, which lacks schools for deaf children, he never learnt sign language.

As a result, Patrick has never had a conversation with anyone.

He has never expressed his dreams, told a girl he likes her, or shouted angry words. He has never even talked about the weather. For the past 15 years, Patrick has been trapped inside his own mind.

But as this tear-jerking 4 minute documentary shows, something happens which turns Patrick’s world upside down…

Patrick is visibly transformed – and he is smiling. It’s almost impossible to believe he’s the same shy and joyless boy.

If you were moved by Patrick’s story, there are a number of charities and organisations working to improve the plight of people who are deaf that you can support.