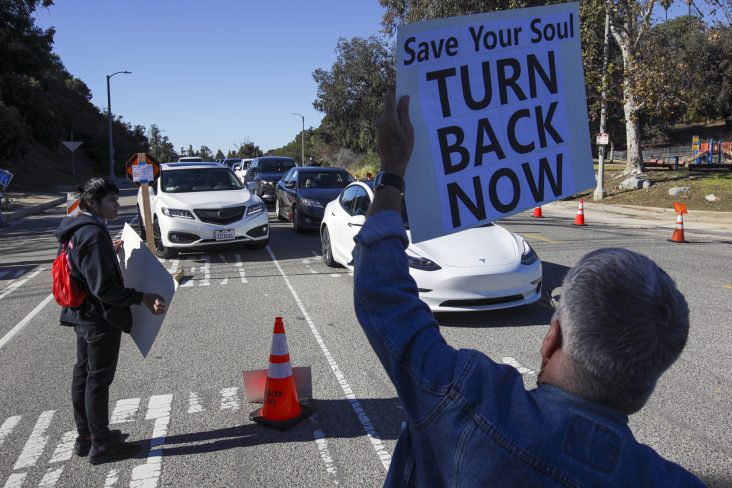 Dodger Stadium’s mass COVID-19 vaccination site was temporarily shut down on Saturday afternoon after 50 protesters gathered at the entrance, causing frustration among hundreds of motorists who had been waiting in line for hours.

Dodger Stadium is one of the largest vaccination sites in Los Angeles, and the fire department had to close the entrance to the stadium for about an hour.

Several LAPD officers also responded to the scene but reports said no arrests were made.

Los Angeles Mayor Eric Garcetti’s spokeswoman Andrea Garcia said that despite the 55-minute interruption, no appointments for vaccinations were canceled.

“We remain committed to vaccinating Angelenos as quickly and safely as possible,” she said.

The demonstrators were a mix of anti-vaxxers and far-right groups. Some carried signs decrying the COVID-19 vaccine and shouting for people not to get the shots, but there were no incidents of violence.

Confirmed coronavirus cases in California have surpassed 3.2 million. More than 40,000 people — one in every 1,000 Californians — have died from complications of COVID-19.

The Los Angeles County Department of Public Health’s official death toll stands at 16,647 after 316 fatalities were confirmed Saturday, along with more than 6,900 new cases.