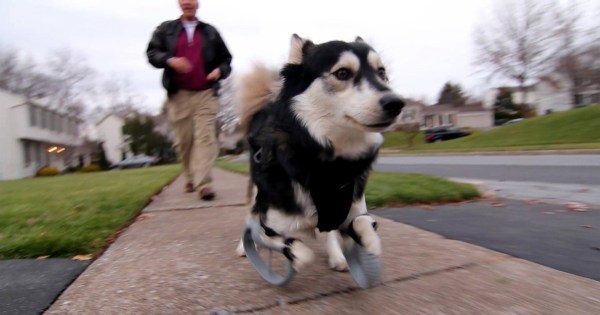 Derby the dog was born with underdeveloped front legs, which significantly hindered his ability to move about. Simply getting around on hard surfaces like concrete was an ordeal. And as for running… that was out of the question.

All this changed when Derby met Tara Anderson, the person who would change his life. Watch the emotional and inspiring video below to see what happened:

Together with Derrick Campana, an expert in animal prosthetics, and her other colleagues, Derby was finally able to do all the things every dog loves doing.

“The first time he was put on them, he took off running,” Sherri Portanova, who recently adopted Derby, said of the dog’s experience with his new “legs.” “I was absolutely amazed at how well he did.”

According to her husband, Derby now runs with the couple “at least two to three miles” every day. “He runs faster than both of us,” he said. “He’s just so happy.”