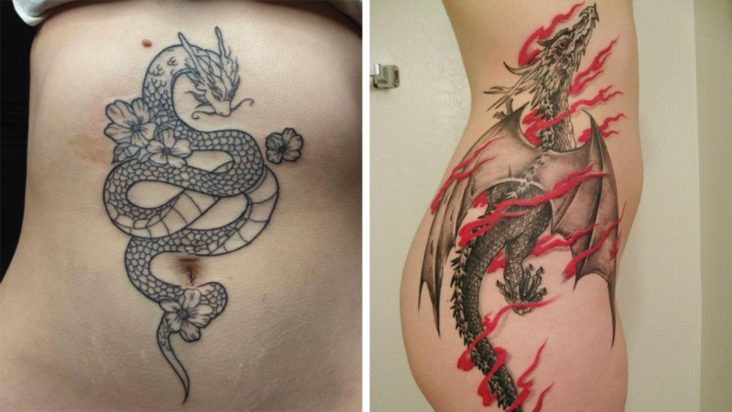 Dragon tattoos are a strong, powerful symbol of strength for women. They represent the power to overcome challenges and adversity with courage and honor.

Women who are seeking empowerment often find themselves drawn to the symbolic meaning of dragons. Dragons represent power and strength so it makes sense that such individuals would gravitate towards this type of design as a form of self-expression.

This post features dragon tattoo designs that include some fierce Asian-inspired dragons as well as traditional Western-style dragons.

The dragon tiger tattoo is a popular design for the Chinese zodiac. It can represent a balance of yin and yang, or as an ancient symbol of power. The symbols themselves are found in Buddhist, Taoist, and Confucian teachings. The dragon represents masculinity, whereas the tiger is feminine. It’s believed that when their combined energies are balanced by love, life can be harmonious and peaceful. As a complex design, the dragon tiger tattoo is best placed on a large area like the sleeve, back, the side or rib. It can also be placed on the thigh and hip.

This Asian-inspired design features a dragon and half moon. The dragon is often considered a symbol of good luck in many cultures throughout the world, including China. Dragons are seen as upholders of justice and generally possess positive energy, while the full moon represents knowledge and mystery. For women, these are powerful symbols that have been used for centuries. These two elements together also represent the cycle of life, where there is always night before daylight, and darkness before dawn.

The dragon and phoenix are popular pairings in Asian folklore. The dragon represents masculine energy, whereas the phoenix represents feminine energy. In Chinese culture, they represent opposite but complementary forces that create balance in nature and within life. This symbol also expresses deep friendship or love between two people. If you’re looking for an empowering tattoo, consider this design as it embodies strength and elegance. The dragon and phoenix tattoo looks great drawn vertically along the thigh, or horizontally from the shoulder going to the upper back.

Snakes are traditionally associated with wisdom. They symbolize transformation, rebirth, and renewal. You can play on these meanings by including a snake in your tattoo design. A dragon and snake paired together represents the yin and yang concept (light vs dark). This tattoo also captures another interesting meaning – power over death. In some traditions, dragons are believed to have dominion over snakes, thus making the dragon a symbol of protection.

Koi fish tattoos have soared in popularity over the last few years, and dragon koi designs are now one of the most popular type of inkings. The colors and beauty of the koi will always be a crowd pleaser, but what makes this design so unique is that it incorporates a traditional Asian-style dragon into the mix. A small dragon with large wings makes a great addition to the fish body. The dragon is facing upwards towards the sky, which is a reminder of his power and authority.

The colorful dragon tattoo often depicts the mythical creature soaring through watercolor clouds. This design is simple yet elegant and can be applied to any body part that suits your personal style. Colorful dragons are ideal ink designs for women as they appear delicate and feminine while exuding power and energy.

The floral dragon tattoo is an elegant and feminine design that’s ideal for the foot, ankle, or calf. The floral dragon is a combination of both Western and Asian art styles, and it is a perfect example of how you can incorporate feminine elements into your dragon tattoo. The soft colors on this design fit beautifully with the theme and create a fantastic look that any woman would love to showcase on their body art.

Many dragon tattoos incorporate Chinese elements and designs. This is particularly popular with Japanese dragons as this style features long, serpentine bodies covered in wispy scales and sharp claws. One of the most striking spots for a Chinese tattoo design is on the back, where the tail hangs down below the waistline – this is no coincidence as Chinese dragons are often associated with the element of water, which originates from the back. In fact, an entire dragon can be inked onto your back using a single piece of body art!

A classic dragon tattoo is an excellent choice for women who like the idea of getting a tattoo but don’t want anything too striking or elaborate on their skin. It’s a scaled down version of a dragon, but it’s still clear to see the shape and contours of the body. This is also a timeless design that will look just as good years from now, so you don’t have to worry about being too trendy or stylish with your ink selection.

Tattoos are an ancient form of art, so tribal styles are a natural choice for the design of your dragon tattoo. Choose a tribal dragon that features bold black lines, which will stand out against your skin, and vibrant colors to make this design pop.

Japanese tattoos are typically done in black and grey, rather than the heavier use of color in Chinese designs. A traditional Japanese dragon tattoo includes a strong tail that frames the body of the creature. The tail is depicted with curves or waves which adds to its sense of movement and power. Classic Japanese-style dragons also have a more elongated body shape with a smaller head and large claws.

There are many legends about dragons in Celtic mythology. They are considered as gatekeepers of other realms, and they provide power and energy to the lands. Dragons also have divine qualities and wisdom. Thus they are honored by Celts through their coat of arms and flag. In most Celtic art, you will also see dragons depicted by eating its tail, which symbolizes the natural cycle and immortality.

Blue dragon tattoos represent power and strength. It can look striking when tattooed on skin, especially if it’s done in a gradation between light and dark blues. To really emphasize the power of the symbol, it’s best to pair blue with a contrasting color such as red.

Yin yang dragon tattoos are symbolically attractive to people who want a balance of opposing forces in their lives. A yin yang design includes two dragons intertwined together. The black dragon represents the feminine energy while the white one stands for masculinity. These images often include flowers which represent love and beauty.

A feminine and soft take on a dragon tattoo is perfect for women who want to make sure their look is unique and special. A feminine dragon design allows you to express your inner power through the use of curves, round shapes, and other elements that represent the female body. To depict the feminine dragon tattoo in all its glory, the recommended placement would be the chest/sternum, thigh, or the back.

Flaming dragon tattoos feature a traditional Chinese dragon that’s been given a fiery touch. These designs are most often placed on the upper back or an arm. You can also add the flaming element to any other design for extra detail.

Small dragon tattoos can be placed anywhere on the body. They tend to be of a simpler design and can look quite cute, depending on the design you go for.

Bearded dragon tattoos are a high-contrast style design that really pop on the skin. It’s an example of how you can mix two completely different styles of tattooing – Asian and Western – to create something that is both unique and interesting. The bearded dragon is an Australian species known for its showy coloration, so the design is quite fitting.

A dragon eye tattoo is done using single needle techniques and is characterized by dramatic shading, dynamic outlines and extensive detail. The tattoo is focused around the dragon’s pupil, which stands for focus and attention in addition to representing protection. It can be interpreted as an act of defense against evil forces. The result is a striking image that captures attention immediately when you look at it.

A cool way to express your love for the iconic manga series Dragon Ball is via a dragon ball tattoo. This tattoo features four balls that are connected with curved lines, which symbolizes unity and power.

A dragon scale tattoo is a tattoo that uses the image of a dragon’s scales. The image is usually black and grey or colored, and features curling lines to give each scale definition. The most popular style of dragon scale tattoo is a fragmented set of scales drawn as if peeking out of the woman’s body. The design symbolizes the wearer’s ability to overcome obstacles, by shrugging them off like scales falling away from a dragon.

A dragon sleeve tattoo covers the arm from shoulder to wrist, and represents strength, courage, power, and protection. The most notable feature of the dragon sleeve tattoo is the tail which can be found at the wrist or elbow. The tail often has a lightning bolt or a sword. The colors are usually shades of green and yellow with shades of grey, black, and brown. The shading is very important as it makes the dragon come to life and gives dimension to the scales on its body.

Dragon Rib tattoos represent strength, stamina, and power while reminding wearers that their lives are precious and fragile. This helps them focus on living the best life they can, rather than wasting energy worrying about things out of their control. The dragon is often depicted with fire coming out of its mouth, representing passion, power, heat, and energy.

How Long Does a Dragon Tattoo Take to Finish?

Depending on the size, a complex dragon tattoo can take at least four hours, to several sessions stretching over several weeks. An intricate Japanese-style dragon tattoo on the back requires detailed planning before tattooing starts.

What Does a Dragon Tattoo Mean?

What Does a Dragon Tattoo Mean for Women?

Is A Dragon Tattoo Bad Luck?

The dragon tattoo is a symbol of power in the West, but it is a lucky charm in Eastern cultures. Women wear a dragon tattoo with pride and honor, as they strive to live up to the symbol the dragon represents.