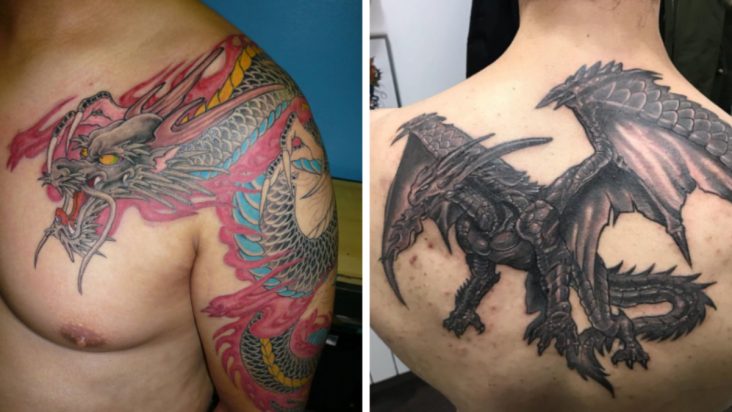 For a design that symbolizes power, respect, wealth, and good luck, a dragon tattoo is a great choice. In this article we cover a variety of designs and styles to help you find out which one is best for you.

If you decide to get a large tattoo for your torso, a full-body dragon tattoo will look amazing on it. Just be careful what design you go with. A full body dragon tattoo in the oriental style is used by both Chinese and Japanese gangsters, so maybe pass on this choice if you want to avoid becoming embroiled in far eastern gang warfare.

A chest-to-arm dragon tattoo is a cool concept that looks fantastic. This style uses plenty of space, and can extend to the back and upper arm. This tattoo is amongst the most popular Asian dragon tattoos as it symbolizes strength and willpower. It is best inked with black and grey colors with shading if preferable.

As one of the largest areas of the body, your artist may need to ink you over multiple sessions. When it comes to dragon designs, there are lots of possibilities. You can get multiple dragons together to form a kind of tribal band. A collection of Chinese symbols will fit nicely along your spine. You could also get dragon wings on the upper back.

Small dragon tattoos can be placed anywhere on the body. They tend to be of a simpler design and can look quite cute, depending on the design you go for. This style of tattoo is often more symbolic than realistic, so it can be quite versatile.

Dragon tattoos are among the most popular type of tattoos because they come in so many different shapes and sizes. They also come with a range of detailed designs from classic to more modern interpretations that feature fire-breathing dragons with wings or scales that look like armor. They look best on the shoulder, arm and across the upper chest.

The Chinese dragon tattoo symbolizes power, strength, and long life. It’s believed that dragons not only control water but also the weather. It is also said that if you live your life with honor and integrity the dragon will guide you safely through life’s challenges. The best placements for a Chinese dragon tattoo are the arms, back of the neck, and legs.

Celtic dragon tattoos are often used as a design element for tribal tattoos or Celtic knotwork tattoos. This tattoo style features dragons in a variety of bright colors with twisting and turning bodies that look like they’re coming out from the skin. Since the designs are elaborate, they are best placed on the arm or back.

Tribal dragon tattoos are a common and popular tattoo design for men. They symbolize different meanings across cultures, but the most common symbolism is power, strength, protection, good luck, and intelligence. For those who want to wear their beliefs on their skin or feel like they’re carrying some sort of talisman with them at all times (like a shield), tribal dragon tattoos might be the perfect choice.

If a whole dragon image does not appeal to you, a dragon face might. A dragon face can be rendered to look terrifying or majestic. They can be either realistic or cartoonish. If you prefer a more serious look, consider the komokiri or “knife cutting dragon.” It’s an iconic image that represents courage and fearlessness. Looks great on the bicep.

Dragon-eye tattoos can look ferocious but very cool. The dragon eye design can symbolize protection, wisdom, knowledge, and fortune. The dragon looks like it’s peeking out from your body, which makes it a very eye-catchy and bold design. This tattoo looks best behind the forearm.

Bearded dragons are popular as pets throughout the United States, and they are sometimes used in tattoos as a way to show affection for these reptiles. Bearded dragon tattoos can be placed just about anywhere on the body, but you’ll often find them on the hand, upper arms, and neck.

Do you identify strongly with the characteristics of a dragon? Do you consider yourself powerful and fierce? Then this unusual dragon body art might be your thing. A skillful tattoo artist will be able to create the illusion of layers of scales beneath your skin. Red and black looks great if you’re going for a traditional, evil dragon look. Blue and green can give off more of a mermaid vibe.

For an image that will get a lot of attention, this flaming dragon tattoo design features a fierce fire-breathing dragon. It is all about raw power and the unstoppable forces of nature. In western culture, dragons are associated with fire and destruction, as showcased in The Hobbit and the Game of Thrones. Make the flames pop with a full-color tattoo, so it stands out! Some artists also use techniques that will make the image glow on your skin. It is a fantastic body art that you can fully commit to!

Dragon tattoos don’t have to be in black ink only. If you want your dragon body art to stand out, adding color can make your design pop. When it comes to color, red is always a good option as this represents prosperity and success in Chinese culture. Gold – another popular color – symbolizes wisdom, power, and dignity so this shade of ink can be used on your dragon tattoo no matter what you’re trying to represent.

The blue dragon tattoo is a modern take on the traditional Chinese and Japanese dragons. It features an azure-colored dragon with swirling patterns that represent movement as if in flight or swimming through water. Blue dragons represent power, strength, and wisdom. This is one of the more popular dragon tattoos because it’s simple but memorable and can be placed on any large prominent area like the shoulder, arm sleeve and thigh.

The Yin Yang dragon is an ancient Chinese symbol that has been used for thousands of years to represent many different things. It can stand for the balance between opposing forces, hope after despair, victory in battle, the sun and the moon, masculinity and femininity, good luck and bad luck. The important thing about this design is that it represents a duality that fits well with almost any other tattoo design or theme. Yin Yang dragon tattoos can be drawn to scale to fit any part of the body.

Using flowers in a dragon tattoo can make it look vibrant and colorful. You can choose to have these flowers adorning the dragon or be part of the dragon. The combination of different colors and level of detail in this design will result in visually stunning tattoo.

The dragon koi represents nobility. Koi fish are also strongly connected to Japanese tradition and culture as the carp symbolizes perseverance and determination. Dragon koi tattoos represent the harmony between heaven and earth or good luck for business ventures. It is best placed on the arms, hands, or chest.

Mixing two powerful images into one tattoo is a great way to show off your fierce side. A dragon-tiger combination creates an interesting design that shows off the power of both creatures. The dragon has scales, wings, and claws for protection while the tiger has powerful muscles, large paws, and sharp teeth for fighting. This is a great idea for anyone looking to show off their power.

The intertwined dragon and snake are powerful, ancient symbols of protection. The Chinese dragon is a symbol of power, healing, strength, longevity, good luck, and transformation. Snakes represent wisdom and wealth in many Asian cultures. The combination of the two creates harmony with one’s environment which brings good fortune. A dragon and snake tattoo can be displayed prominently on the chest, back, or arm.

Moon and dragon tattoos make a dynamic duo. These two bodies of ink work well together as both celestial bodies are associated with power and strength – the moon is associated with magical powers in Asian cultures, while dragons represent strength and success in East Asian folklore. The moon is reminiscent of the Chinese yin-and-yang symbol, a black and white circle that is said to contain the universe. This is a great option for those who want both symbolic meanings in their design, as well as a bit of color!

The dragon is one of the most revered creatures in Chinese history, art and mythology. They are powerful symbols of strength and good luck. The Phoenix represents the Empress (or king, depending on its gender). As a pair, they represent love and harmony – two concepts that are strongly tied to many Asian cultures.

How long does a dragon tattoo take to finish?

Depending on the size, a complex dragon tattoo can take at four hours, to several sessions stretching over several weeks. An intricate Japanese-style dragon tattoo on the back requires detailed planning before tattooing starts.

What does a dragon tattoo mean?

In Western culture, the dragon is a fearsome creature and adversary, and the tattoo represents power and evil. In eastern cultures, especially Chinese and Japanese, dragon tattoos also symbolize luck, wisdom and family values.

Is a dragon tattoo bad luck?

The dragon tattoo is a symbol of power in the West, but it is a lucky charm in Eastern cultures.