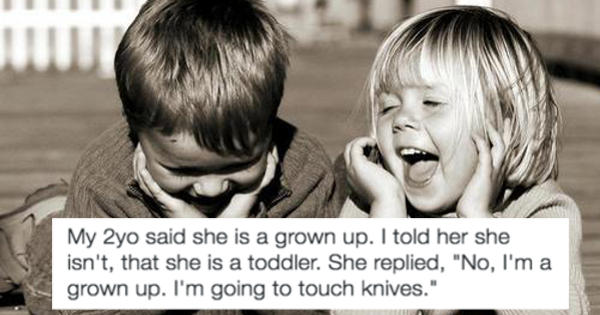 My 5 yo after I explained the concept of breastfeeding: "can you squeeze Capri Suns outta those things or just milk?"

#5. Mastering sarcasm before the alphabet.

My 4yo has never said "great" non-sarcastically. Pretty sure he just thinks it's a negative word.

My 11 year old son wrote this joke: 'When is it the right time to tell your mother she was adopted?'

Daughter: How was your day, Daddy?
Me: Pretty busy, lots of meetings and deadlines.
Her: DEAD LIONS!?!

"When I'm big I'll be a taxi driver" "Well, by then robots will drive cars" Now he's sad and hates robots, and that's why I'm a crappy dad

[two of my four kids burst into tears]

Random lady walking by: Why are you crying, girls?

Me: It's cute that you think there's a reason.

When your kid is a baby: "I can't wait til they learn to talk!"

Most inventors are smart, but not the person who invented homework. They are the worst of all the inventors.
-My 7yo

#17. Master of subtlety (and self-incrimination).

4yo: What happens if your phone goes in the potty?

#18. Apparently this isn’t how parenting works.

At what point in listening to your kid whine can you say, "Sorry. This relationship isn't working out. You should start seeing other moms."

The Girl: Why would someone dress like a hamster?