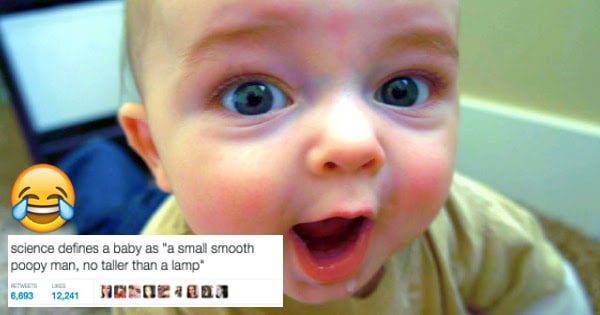 Mom holding crying baby: He just needs to be changed.
Me: Yeah hopefully into a puppy or something quieter.

#3. …and this sad realization.

Wife: can you change the baby
Me: oh thank god. I'm so glad you said that. Yes, yes I will
Wife: I don't mean swap it for a new one
Me: …

Babies are okay if you're into alarm clocks that poop.

#5. When you’ve fallen for that ol’ trick before.

Me to baby: Say Dada!
Husband: You don't want her first word to be Mama?
Me: Hell no! The other 2 won't leave me alone. This one's yours.

I can't tell if my baby is a slow clapper or is starting a slow clap to mock my parenting.

HER: HAVE YOU SEEN THE BABY?!?

ME: If he loves you, he'll come back.

Some people have painted the Sistine Chapel. Others built pyramids. I once moved a baby from the car to a crib without the baby waking up.

Babies hit the bottle all night, poop their pants, puke, don’t work, don’t pay rent… Reminds me of a drunken roommate I evicted.

Is it me or does burping a baby feel like russian roulette with vomit?

why do baby's clothes need pockets? what do they carry around? baby wallets? fuck off

Parenting a newborn:
30% feeding
50% changing diapers
20% worrying
80% becoming so sleep deprived that you forget how to do basic math

The hardest yoga position is the one where you spread your legs, push push push and a baby comes out

Me: [food all over my face]

(Sees Facebook picture of a crush from middle school holding her second newborn)
“I guess it’s really over between us."

baby: ..down with heteronormativity and the fragility of masculinity

#19. When dinner time gets serious.

*slides note to baby* IF YOU EVER WANT TO SEE YOUR NOSE AGAIN EAT ALL YOUR VEGETABLES AT DINNER TIME. WE ARE NOT FUCKING AROUND.

I knew it was time to vacuum when the baby rolled over and looked like an everything bagel.

Accidentally switched the baby formula with coconut milk and now my newborn is complaining that her lullabies are "too mainstream."

science defines a baby as "a small smooth poopy man, no taller than a lamp"

#23. If babies could order their own food.

Waiter: and for sir?
Baby: [closes menu] bring me your finest tits

#24. The unexpected joys of parenting.

Another surprise benefit of having a baby is using my new swaddling skills to roll a tight, tight burrito.