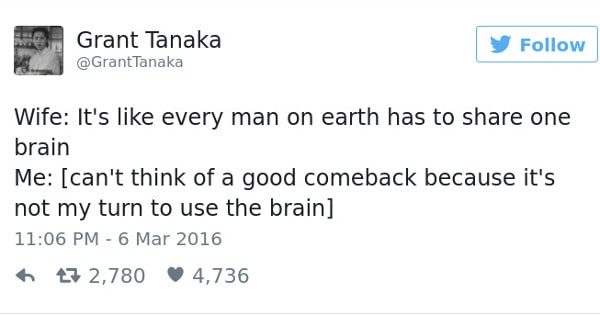 Wife: It's like every man on earth has to share one brain
Me: [can't think of a good comeback because it's not my turn to use the brain]

Me: I don't have time to play right now

Wife: Take out the trash

Wife: We need milk, eggs, and bread. Write it down.

Me: No need. I'll remember.

Wife: What did you buy?

My wife is finally coming home from her week long trip, so you know what I'm getting tonight… yelled at. I'm gonna get yelled at.

The Mrs and I have been married so long she can finish my sentences.
She also starts most of them and supplies the middle parts too.

Wife: What are you thinking about?

Me: *pauses daydream about zombie ninjas fighting cyborg Nazis from the future* You.

I told my husband I wanted a hedgehog and he said we don't need a hedgehog. Long story short, we're picking it up on Thursday.

WIFE: you forgot to run the dishwasher again, didn't you?

ME: [drinking milk from a flower vase] no, why?

Me: I already have one of those. It's called a w-

Me: It's called me

WIFE: Stop spending money on stupid stuff
ME: Okay
[later]
WIFE: What the hell?
[dog walks by in a tuxedo]
ME: He's getting married, Karen

Let's get married and have kids so instead of enjoying coffee in the morning you can braid hair while I pack lunches and we can all be late.