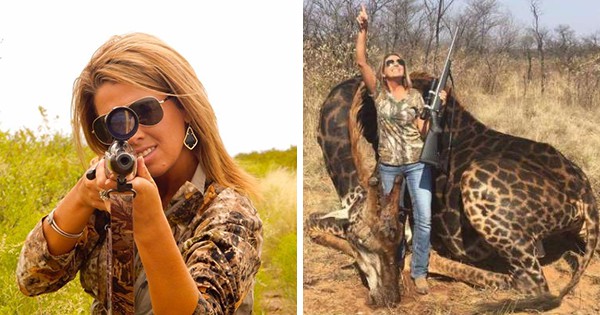 Trophy hunting in Zambia, South Africa, Namibia, and Zimbabwe is legal, and these places have become popular destinations for people who like killing animals for no other reason than sport.

An American hunter named Tess Thompson Talley has received a lot of backlash for posting a selfie with a dead black giraffe—considered rare because of its unusually dark-colored, almost black spots.

The photos were taken in South Africa and feature the extremely proud Texan hunter showing off her recent kill, while the dead animal is folded over and its face is dug into the floor.

A lot of people were outraged at the woman’s selfies:

White american savage who is partly a neanderthal comes to Africa and shoot down a very rare black giraffe coutrsey of South Africa stupidity. Her name is Tess Thompson Talley. Please share pic.twitter.com/hSK93DOOaz

So Tess Thompson Talley, you managed to shoot a sedentary Giraffe – go you!!

Some people don’t deserve this world. Her name is Tess Thompson Talley. pic.twitter.com/jaT8M2mdWn

I need y'alls help! Her name is Tess Thompson Talley and these photos are on her Facebook, she is a very small-minded individual & doesn't understand the magnitude of her actions. If we all say why we think her actions are wrong, hopefully we can have an impact on her perspective pic.twitter.com/jk77oTLQ2z

Others brought some interesting insights to the table:

If the government cannot care about its citizens my dear what makes you think they even give two flying doves about an animal. Until we see the value of what we have then we will never appreciate

SA Gov needs to change the laws to ban canned hunting on private game farms and everywhere else. There needs to be political will to protect our wildlife& natural resources over profit.Also find the private ownership of wild animals& nature, morally& ethically foul

About 1.7 million trophies were traded in the between the years 2004 and 2014, according to Discover Wildlife.

Out of those, 200,000—or roughly 20,000 per year—belonged to animals that are classified as threatened by the IUCN.

In Africa, Kenya and Botswana have totally banned hunting for sport. In Australia, France and the Netherlands, importing of lion trophies is now considered illegal, while the UK is still on the fence regarding this matter.

Talley’s photos are just the most recent reminder of the bigger issue of wildlife conservation that’s dividing Africa today.

If our so called governments can't care for our wildlife then its time we stand up and responsibility of our continent, lands, resources and wildlife….share share share! and lets have a united voice against pillage of Africa, it's the only home we have