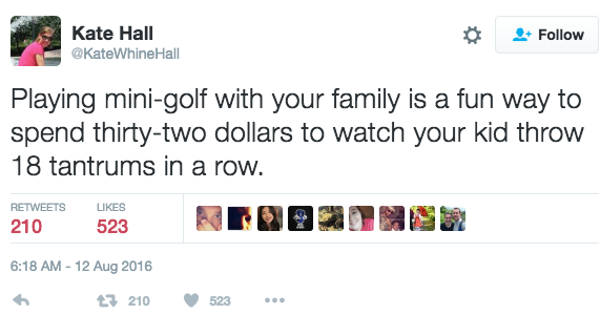 Financial status: taping together a dollar bill that my toddler ripped to shreds

My wife said we would save money on Halloween candy if we bought it at Aldi so I guess we're handing out Twicks, Skattles, and 4 Musketeers.

I'm going to Target, I'll be back when the money is all gone.

My wife and kids are on vacation for a week. I think I'm gonna use the money saved on water and food to buy a Mercedes.

If I tell the kids I can't buy them something the standard response is "JUST USE THE CARD" so clearly they're set up for financial success.

If I had a dollar for every time my kids asked me to buy them something or take them somewhere, I could afford to actually do all that shit.

Playing mini-golf with your family is a fun way to spend thirty-two dollars to watch your kid throw 18 tantrums in a row.

In case you're a newer parent, my kids are playing in a cardboard box and pretending that bars of soap are toys, so save yourself some money

*The night before week four of t-ball*

Me: You ready for your next t-ball game, pal?
4yo: What's t-ball?
Me: A waste of money, apparently.