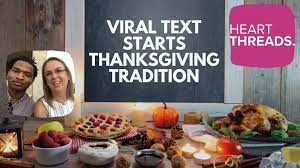 Thanksgiving is traditionally a time to focus on the aspects of our life that are sometimes forgotten and undervalued.

Some of the things mentioned by family members around the dinner table on occasion include good health, availability to food, and having a place to live.

However, for two Mesa residents, the holiday confirms their dedication to one another and the serendipitous bond that arose from a wrong-number text.

Wanda Dench and Jamal Hinton are preparing another Thanksgiving together, a tradition that began in 2016 when Wanda mistook Jamal for one of her grandkids. Despite finding that Jamal was not who she believed he was, Wanda welcomed Jamal into her house for the holiday.

He agreed, and a popular Twitter post with images of the text chats catapulted the two into internet celebrity and a lifelong relationship.

“I told her the cameras and the fame, everything could end tomorrow, and nothing is changing between us,” Hinton said.

“Absolutely,” Dench said in the interview. “He’s in my heart for life.”

Aside from Thanksgiving preparations, the two have been working on an upcoming film about their friendship with Netflix.

However, when asked about it, Dench stated that they “weren’t authorized to talk about it.”

Dench was able to speak about Jamal recently guiding her through obtaining her first tattoo.

“Got my first tattoo at age 65,” Dench said on her Instagram page. “3 shooting stars-one for my husband, mother and father. My guardian angels.”