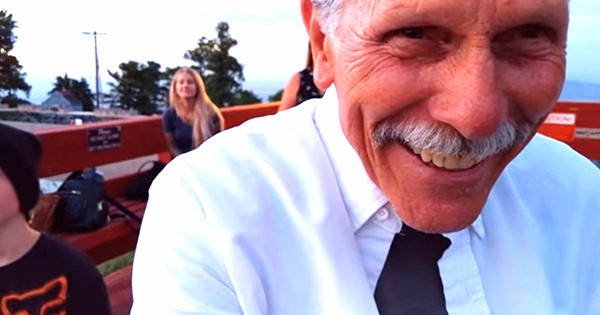 It’s a known fact that technology isn’t exactly a strong point for senior citizens. But apparently, not everyone has read the memo.

Jayce Flauding, Jamie Hart, and their family visited the scenic Sandia Peak Tramway in Albuquerque, New Mexico last month and befriended a couple during the tram ride to the mountaintop.

Jamie’s grandpa, John Hart, jokingly told his new buddy Christopher that the peak would be a perfect location for him to propose to his longtime girlfriend of eight years, Kandace.

Little did John know that the peak was where the couple had their first date, and that Christopher was planning to pop the question as soon as they got to the top.

“He introduced me to his girlfriend and at that point I said, ‘wow hey this would be a great chance for you to propose to your girlfriend and put a big smile on her face,’” John said. “And unbeknownst to me, that was the plan.”

Just before the big moment, Christopher pulled Jayce aside and handed him an iPhone so that someone could capture it. But in their excitement, Jayce passed the iPhone to John and assigned to him the important task of filming the momentous occasion.

John, a former Marine photographer, accidentally pointed the camera at the wrong direction and ended up recording himself instead of the proposal:

The video ended up going viral, and netizens dubbed John as “Wholesome Grandpa”.

News channel KOB4 sent out an appeal to find Christopher and Kandace. Over a week later, the couple reached out to the news network and confirmed their identity.

The eager public finally saw a video of the now-famous proposal (this time, taken correctly).