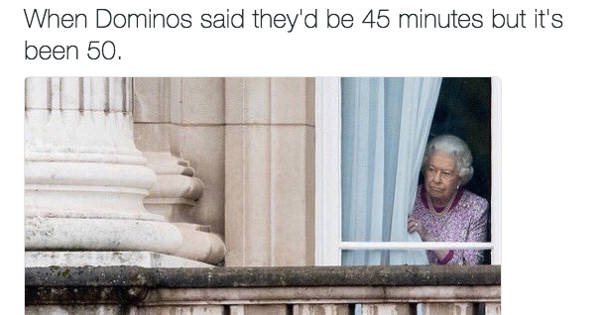 [flashback to the room at home that hides all my desserts]

ME: [nervous laugh] Haha I don't have one of those.

Ordered Chinese last night. For a minute I was like "they woke AF" Then I realized I was tripping it was beef lo mein. pic.twitter.com/cGXFbZIlzw

Her: babe I want sushi
Me: bone app the teeth pic.twitter.com/Bp1FF1oql2

Why are there biscuits in the sewing kit tin? pic.twitter.com/Mx7RozoMbF

Please don't break the window. The A/C is on, he has water, and is listening to his favorite music. pic.twitter.com/vqAPYgQ4Id

When Dominos said they'd be 45 minutes but it's been 50. pic.twitter.com/HqJwZXXrKY

Pleasure to meet you. The name's… pic.twitter.com/Auq5ynNTHJ

Me: God, I just feel so
Brain: HUNGRY
M: No, I'm very alone. I desperately want
B: FOOD
M: Part of me is missing. All I need is
B: PRINGLES

I just want someone who looks at me the way my brother looks at ketchup pic.twitter.com/gDcrGcjG13