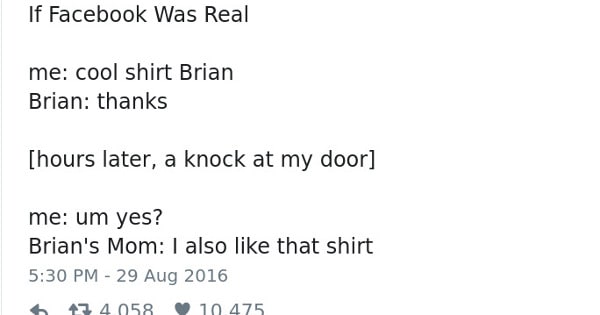 My neighbor has an unsecured, wireless printer. I just sent this document to it. pic.twitter.com/dBvSmTpfpp

Hold up, I forgot my phone charger.

I totally understand how batteries feel because I'm rarely ever included in things either.

My daughter just asked why we say "hang up" the phone and now I feel 90.

This is the most suspicious error screen I've ever seen pic.twitter.com/StDjwGeIqh

Before you buy that nice jacket online, ask yourself: "Am I willing to delete one extra email every day for the rest of my life?"

When the inventor of the USB stick dies they'll gently lower the coffin, then pull it back up, turn it the other way, then lower it again.

Oh hi Becky who refused to kiss me during spin the bottle in 6th grade & now wants to play FarmVille, looks like tables have fucking turned

I was just watching “I Love Lucy” and my 5-year-old was like, “Mom, what’s wrong with the TV, all the color is missing."