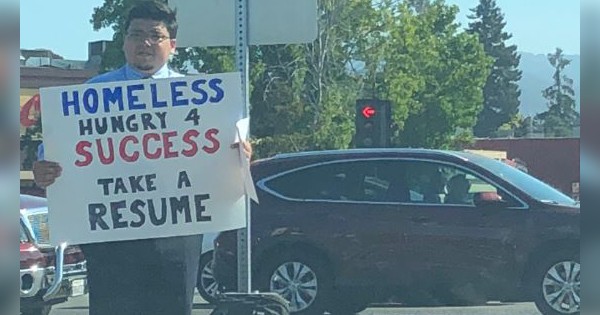 These days, having a good educational background and sufficient work experience doesn’t automatically assure your chances of landing a good job.

One job hunter in particular, David Casarez, decided to take matters into his own hands.

Over the weekend, the 26-year-old developer went viral when a passer-by posted a photo of him holding a signboard asking for people to take his CV in lieu of giving him money.

Today I saw this young homeless man asking for people to take a resume rather than asking for money. If anyone in the Silicon Valley could help him out, that would be amazing. Please RT so we can help David out! pic.twitter.com/ewoE3PKFx7

Casarez was a college graduate who moved to Silicon Valley last September with three years’ worth of work experience as a software developer. The main reason of his bold move was to launch a startup.

But apparently, Casarez underestimated the cost of living in Santa Clara Valley, and wasn’t able to find a job right away to finance his necessities. He slept in his van until June, when even that was taken away since he could no longer keep up with the payments.

Casarez ended up spending his nights in parks because he had nowhere else to stay.

“All I wanted was for one person to notice, take my resume and give me an opportunity,” he said in an interview.

That was when Twitter user FullMakeup Alchemist posted the photo, which garnered tens of thousands of retweets. She confirmed that David had given her permission to share his picture. She also tried to follow-up on his current situation.

FullMakeup Alchemist added: “I just got off the phone with David. We spoke for about an hour. He came to the Silicon Valley with a dream to be successful in tech and has a lot to offer the community. He’s sleeping in parks and still trying to get freelance work, interviews and applications in.”

Since her tweet, generous people from all over have stepped forward to support Casarez.

We’ll take care of him if no one else has stepped in yet. Have a nonprofit fund for this kind of thing, or housing, or industry connections, whatever he prefers

Some even spoke about their own experiences with homelessness.

Thank you for posting. I've almost been homeless a couple of times (not an exaggeration). Having no money for food and no place to rest really sucks–it's so awful. My heart seriously goes out to this guy.

And even better, Casarez actually received several job offers on the platform.

Hello, I am VP Engineering at AncestryDNA and also an Aggie, class of 93. I would love to interview David Casarez for a Web developer or QA automation position. Can you please put me in touch with David ?

Emailed him. He’ll be taken care of one way or another, probably doesn’t even need us. Anyone else with this much gumption and hustle please send my way. https://t.co/RnAiNd3pfr

Casarez clarified that he’s not doing this for charity: “I’m not trying to take any money, I really do just want a job opportunity. That’s all I’m asking.”

On Sunday, he went on Twitter to thank everyone for the love he’s been showered with since going viral.

Thank you everyone for the outpouring of support! I am completely floored by how many are interested in my #Hungry4Success story. I have met several who have been or currently are in the same situation tell me their story. I am glad to be an inspiration for you all.

We wish you all the luck in the world, David! But with that much determination and wit, who needs luck?