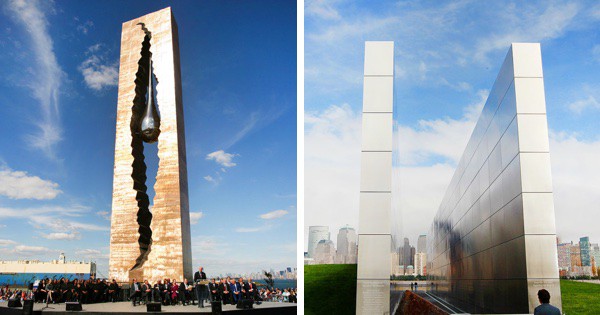 Former London Mayor Boris Johnson unveiled the sculpture by U.S. artist Miya Ando entitled “Since 9/11”, which uses steel taken from the World Trade Center. The piece was commissioned by a UK-based charity to help educate Londoners about the attack on the World Trade Center and the Pentagon. 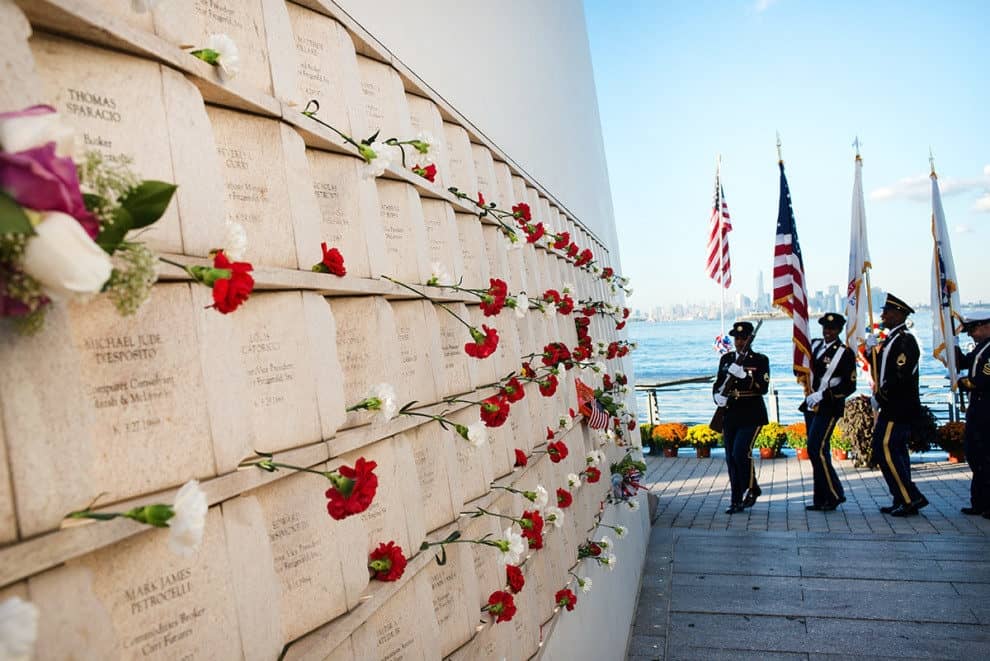 On the inner wall of one of the two “wings” comprising Masayuki Sono’s “Postcards” monument, flowers are placed next to the names of victims of the WTC attacks. The memorial honors the lives of 274 Staten Island residents who died in the attack. 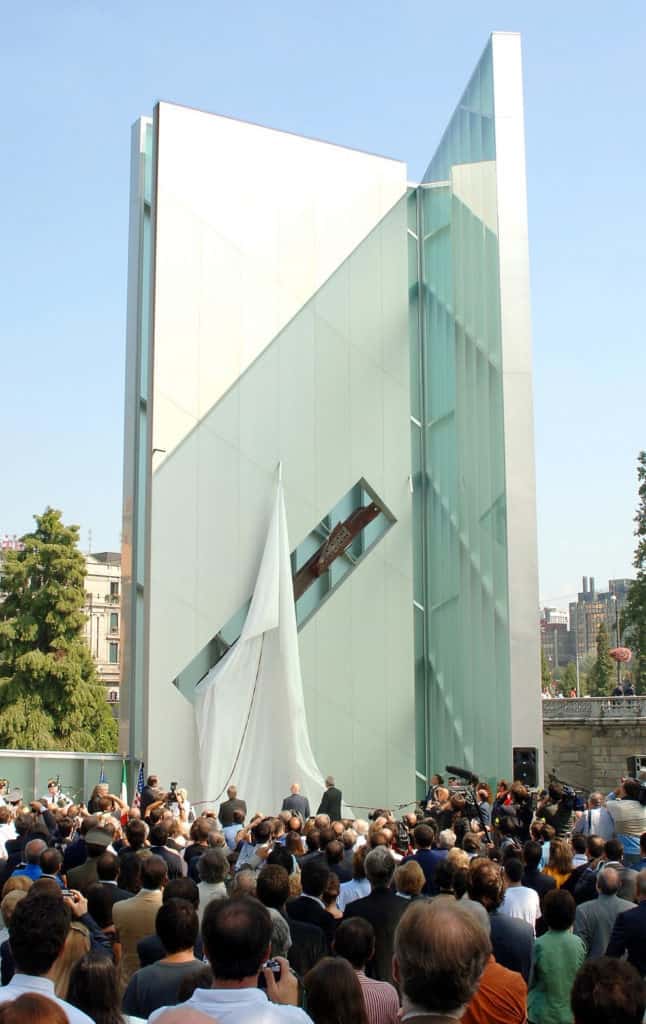 The “Memory and Light” monument was designed by Daniel Libeskind, the architect who created the master plan for reconstructing at ground zero. Italy marked the fourth anniversary of the 9/11 attacks with a new glass and steel memorial that incorporates a twisted steel beam from the World Trade Center. 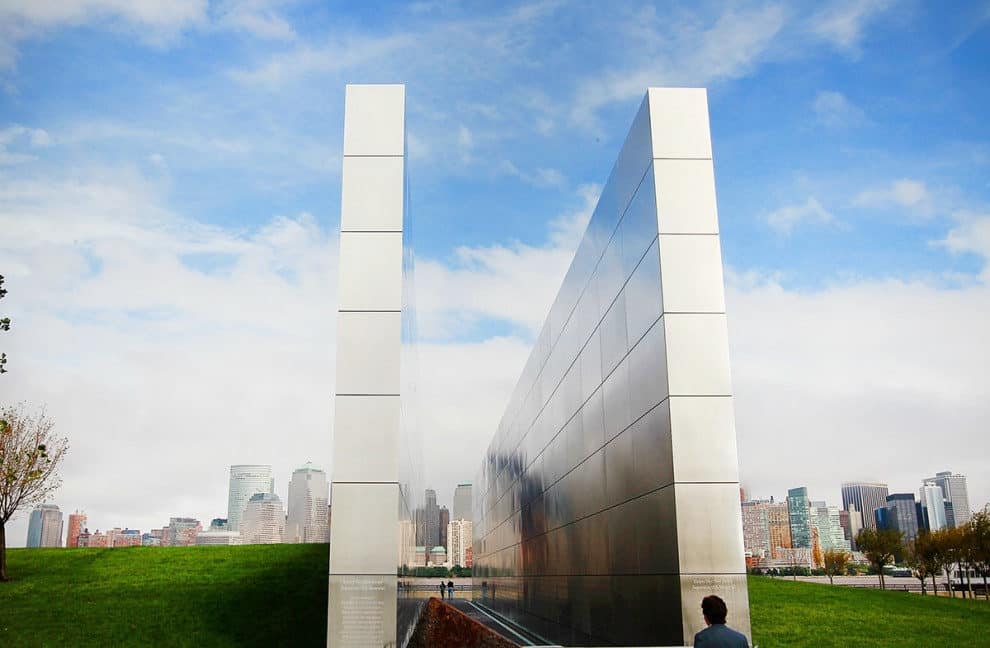 The concrete and steel “Empty Sky Memorial” was designed by architect Jessica Jamroz and pays tribute to the 746 citizens of New Jersey who lost their lives. 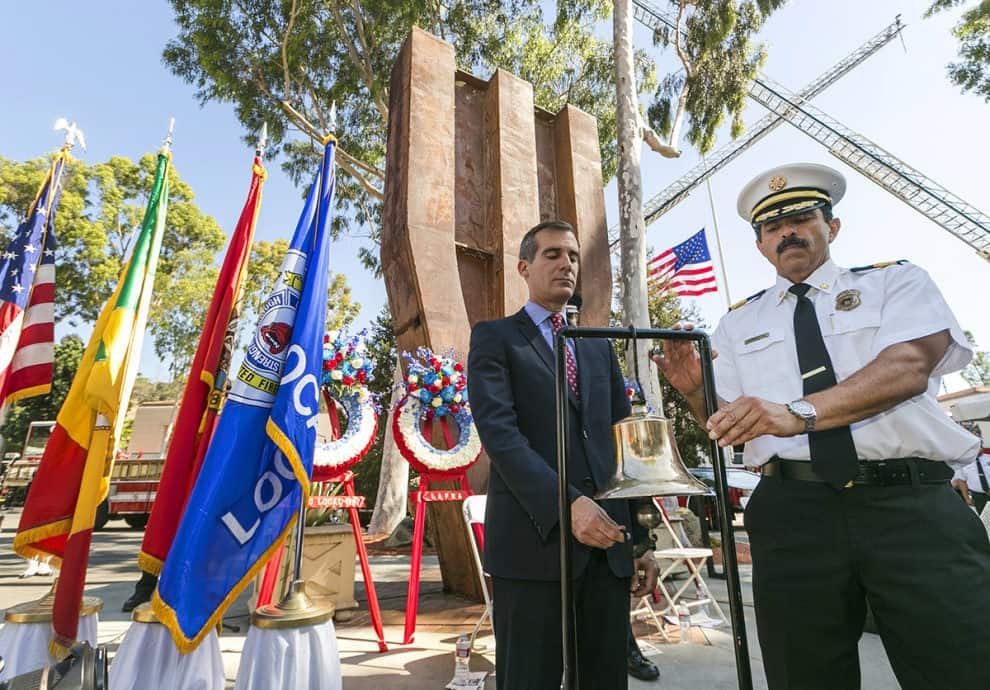 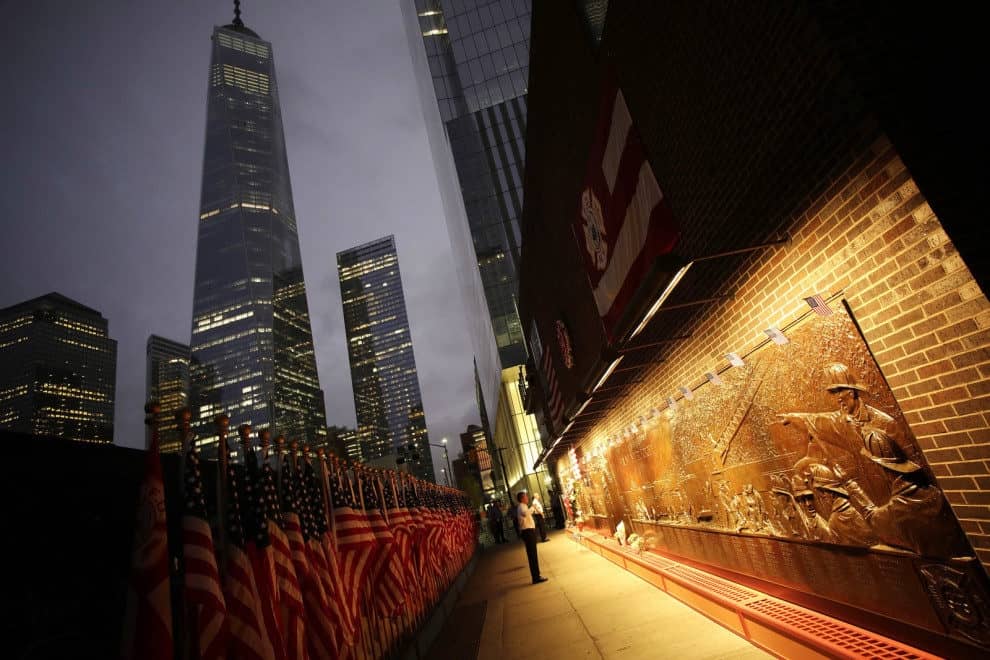 A firefighter looks at the mural on the outside firehouse Engine 10 Company 10, next to the World Trade Center in New York. The 56-foot bronze mural honors the 343 New York firefighters who were killed in the terrorist attacks. 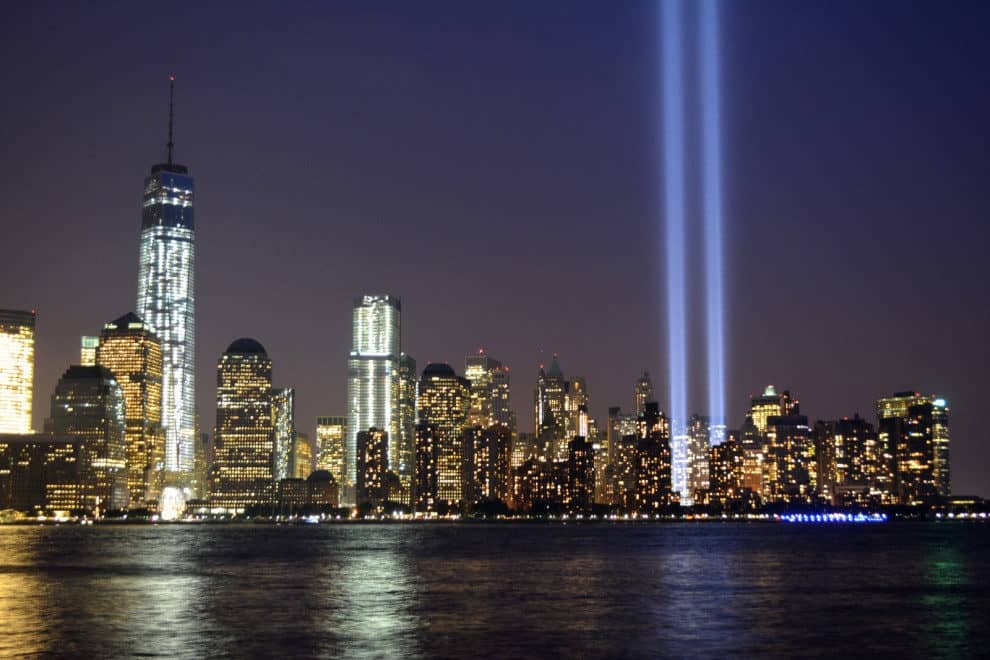 “Tribute in Light” is an ephemeral light sculpture consisted of 88 searchlights placed at near the World Trade Center, projecting two beams of light that echo what was once the Twin Towers 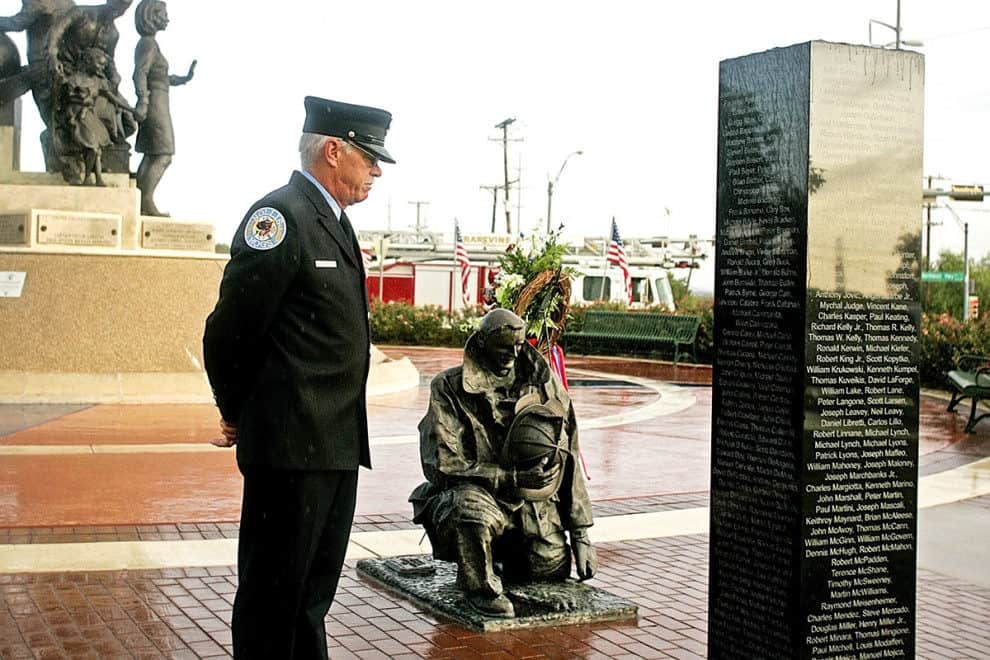 New York firefighter Stephen Humenesky views the monument honoring the firefighters who lost their lives during a 9/11 remembrance ceremony in Grapevine, Texas. Humenesky, who worked on Engine 301 and was at Ground Zero that day, is now retired and lives in the area. He says he pays his respects here since he cannot make it back to New York. 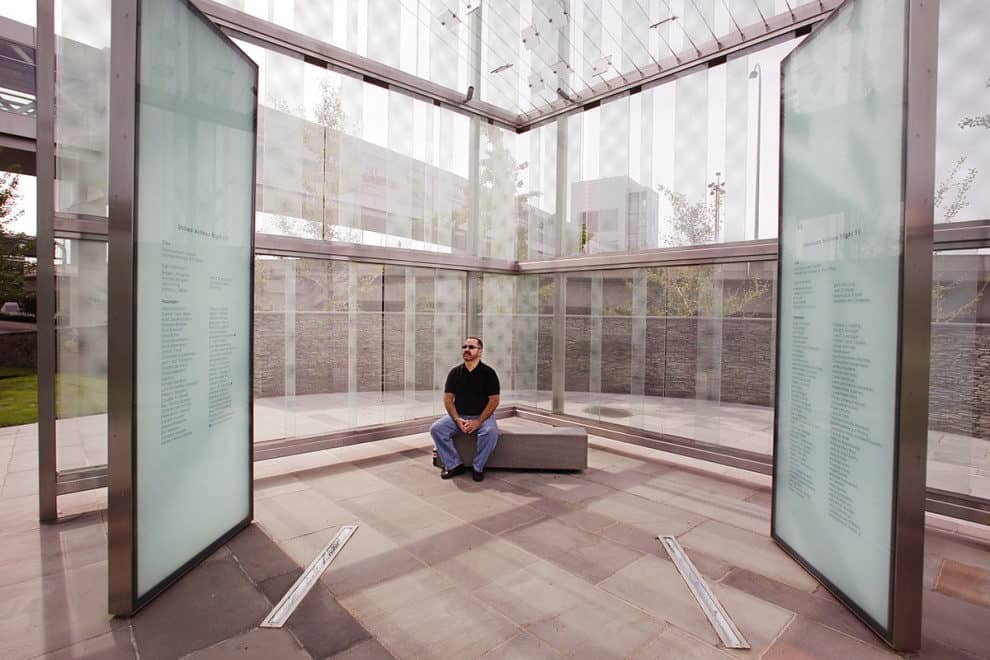 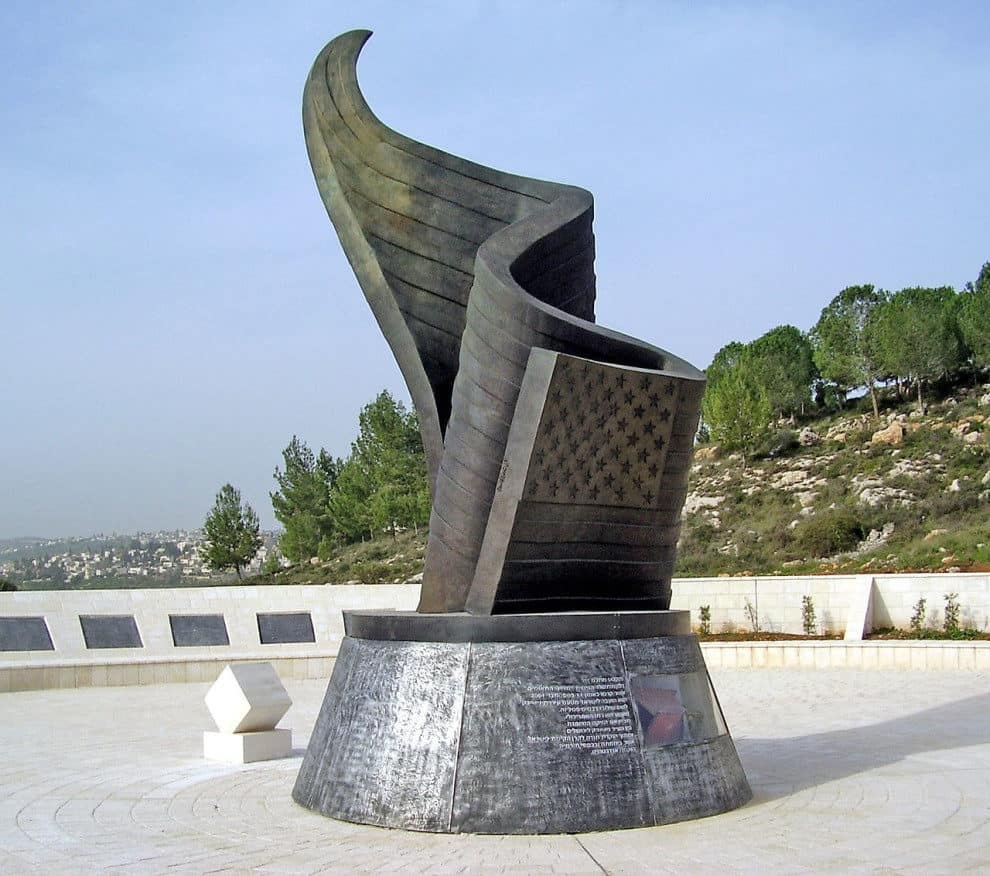 This monument measures 30 feet and has been partly forged with recovered steel from the Twin Towers. Inscribed on the surrounding plaques are the names of those killed in the attacks.

#11. The 9/11 Memorial at the Public Garden in Boston, Massachusetts. 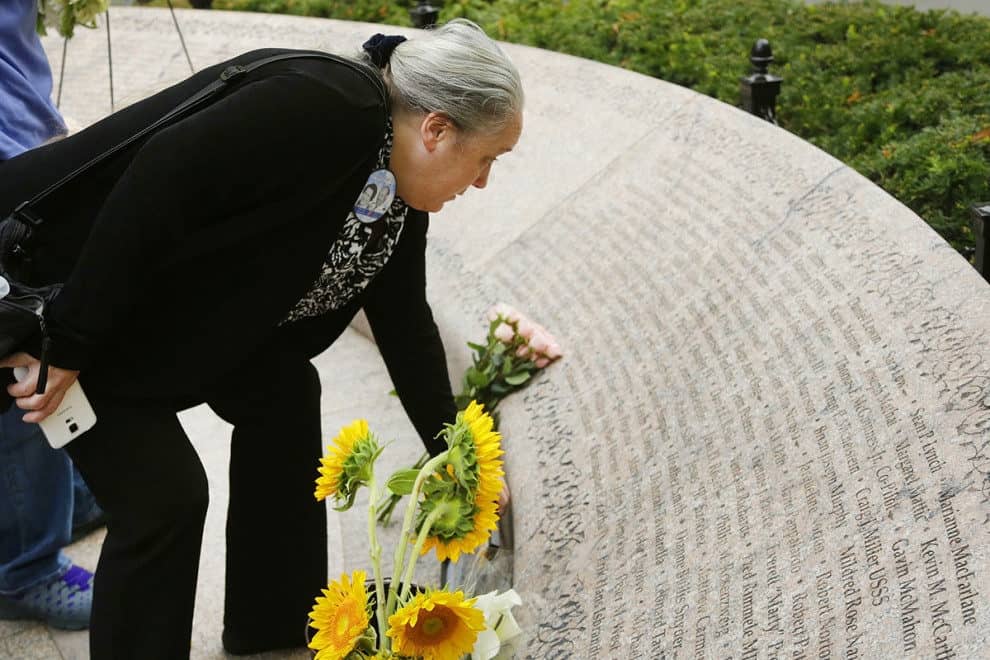 A woman pauses at the 9/11 Memorial at the Public Garden in Boston to honor victims on September 11th, 2014. The two planes hijacked by the terrorists and deliberately crashed into the World Trade Center towers had departed from Logan International Airport in Boston, Massachusetts. 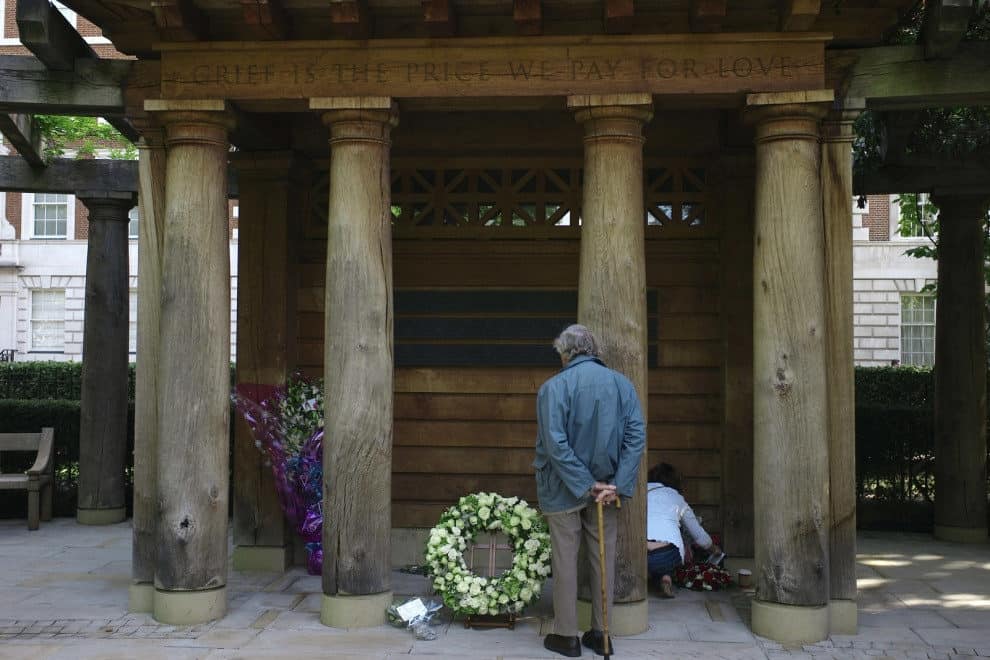 The September 11 Memorial Garden in London was created in 2003 and is inscribed with the words, “Grief is the price we pay for love.” 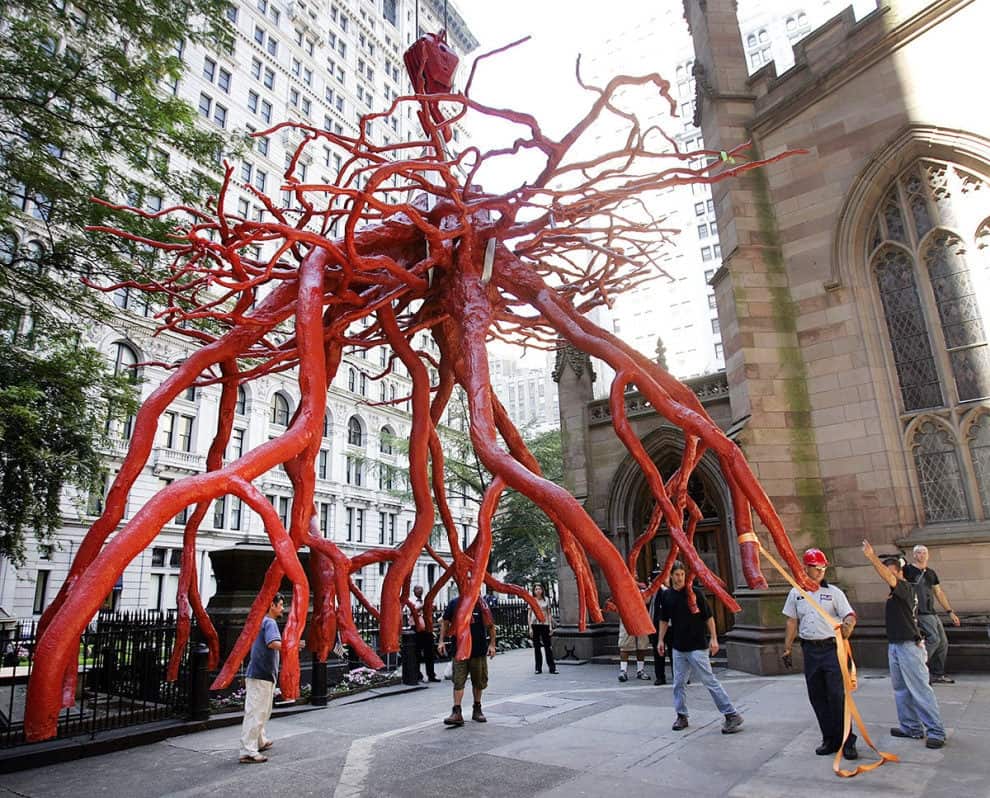 Guided by workmen, the “Trinity Root” sculpture is lowered into place by a crane in the Trinity Church yard of New York CIty. The three ton, 12 1/2- by 20-foot bronze sculpture memorialized the stump of a 70-year-old sycamore tree that shielded St. Paul’s Chapel from falling debris on September 11, 2001. 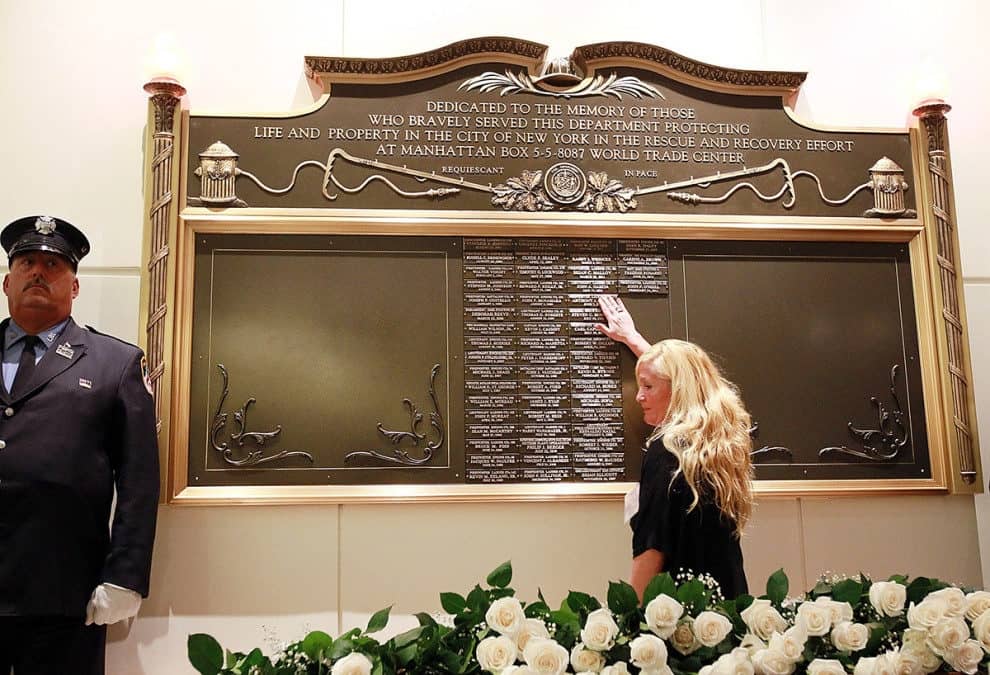 A woman touches a name on a plaque in honor of FDNY firefighters who have died from illnesses related to working at Ground Zero. 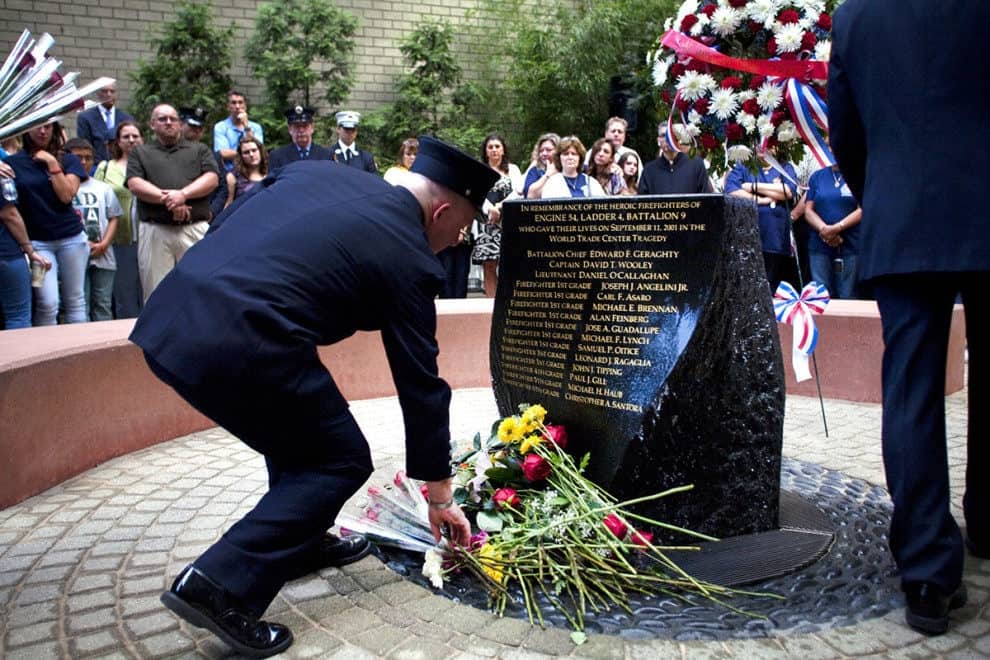 A FDNY firefighter lays flowers at a memorial monument during the tenth anniversary service honoring the 15 firefighters of Engine 54 Ladder 4 who died responding to the September 11th, 2001 terrorist attacks. 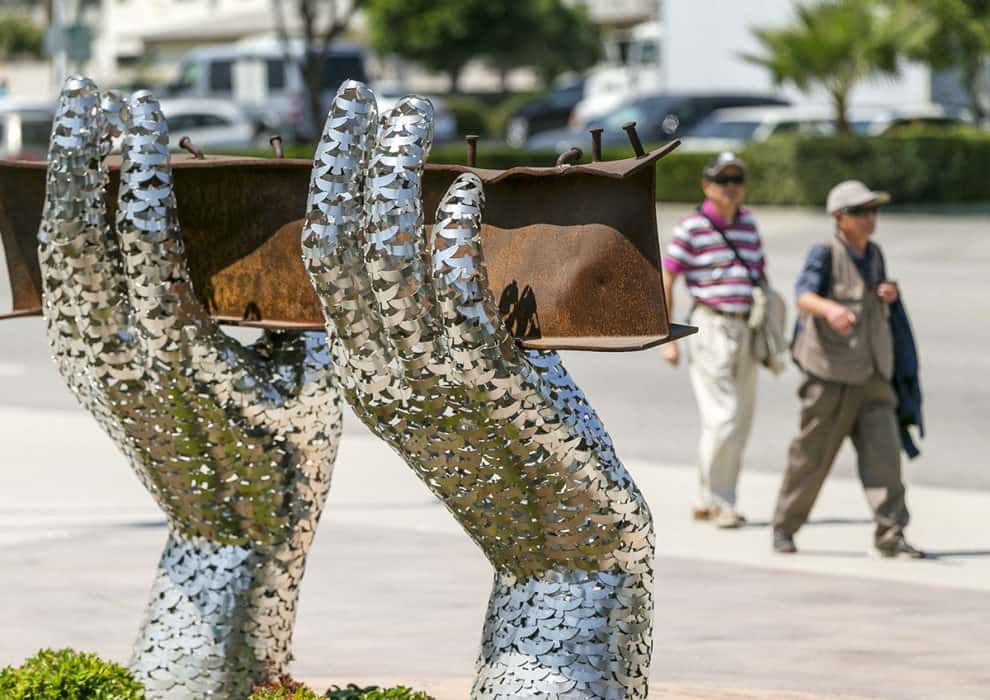 Heath Satow’s sculpture “Reflect” is made with a damaged, rusted I-beam from the collapsed World Trade Center buildings. Each of the two hands are constructed with 2,976 interlocking birds representing the individual victims from the 2001 attacks.

#17. “Monument To The Struggle Against World Terrorism” in Bayonne, New Jersey. 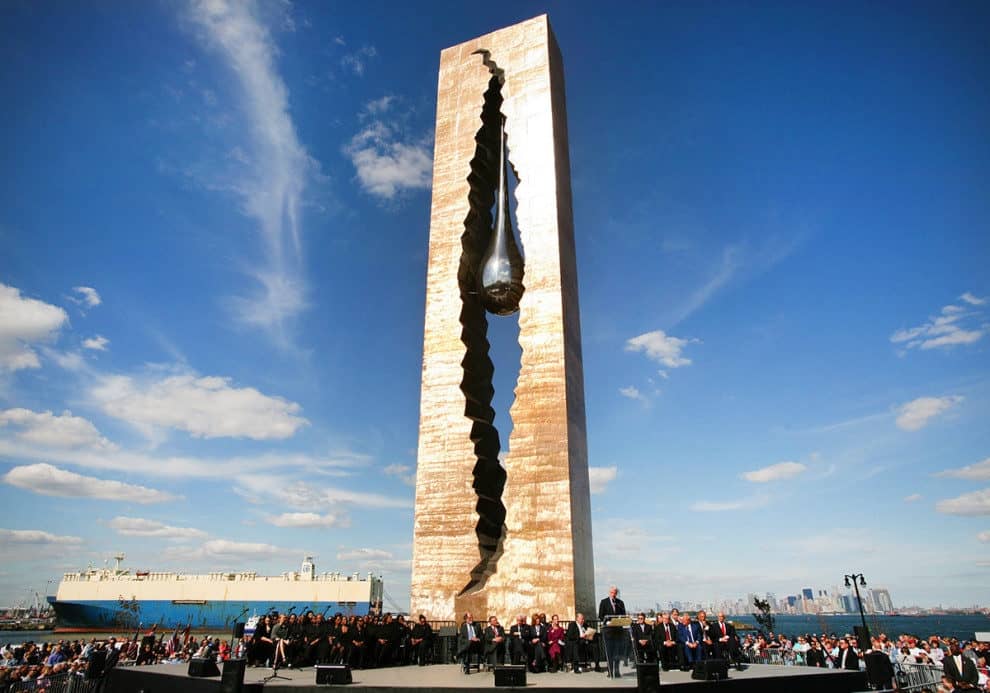 Designed by sculptor Zurab Tsereteli, this monument was a gift from Russian President Vladimir Putin and the Russian people. 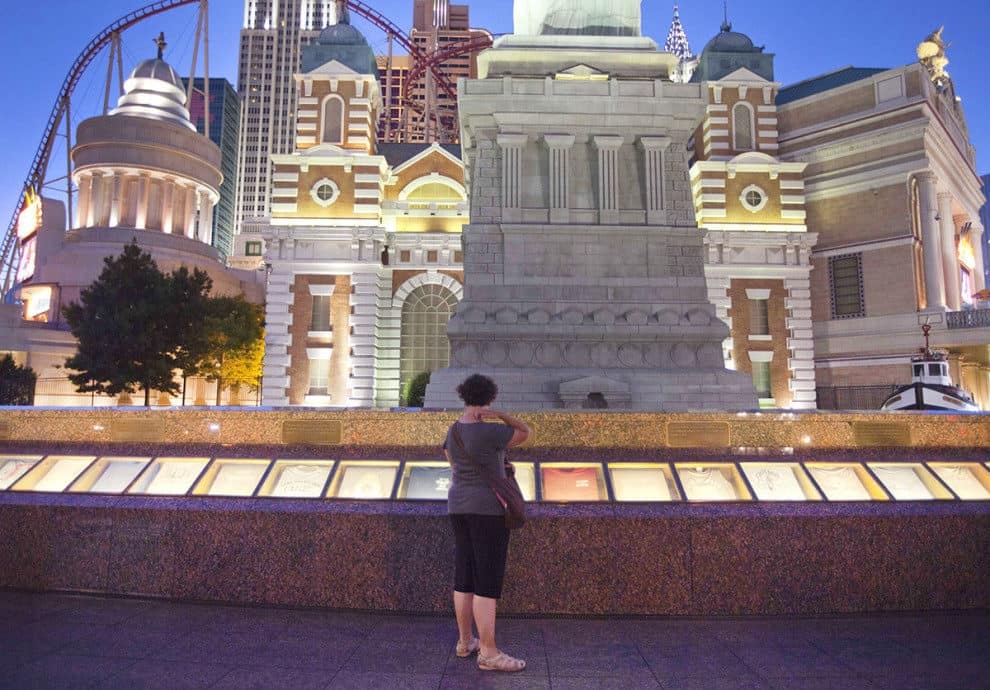 This memorial once held a rotating collection of firefighter t-shirts commemorating the lives lost in the attacks on the World Trade Center, but has since been demolished to make way for a $100 million renovation of the promenade in front of the Manhattan-themed casino and the adjoining Monte Carlo.

#19. The National September 11 Memorial and Museum in New York City. 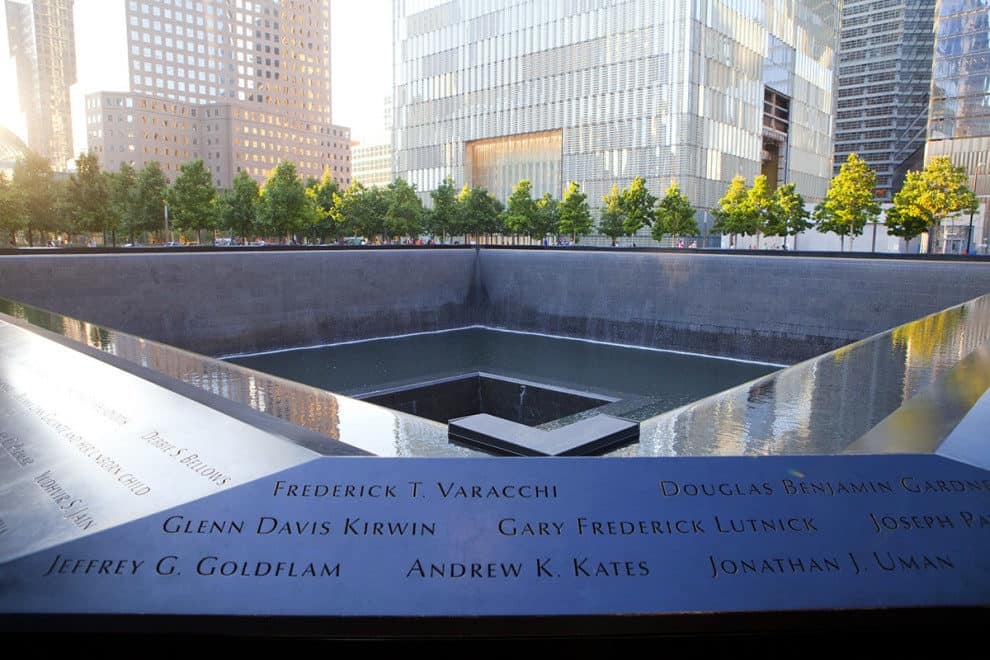 The 9/11 Memorial Pool was constructed at the former place of the World Trade Center in lower Manhattan. The plaza features two reflecting pools inscribed with the names of those killed on September 11th, 2001.

#20. The Pentagon Memorial in Arlington, Virginia. 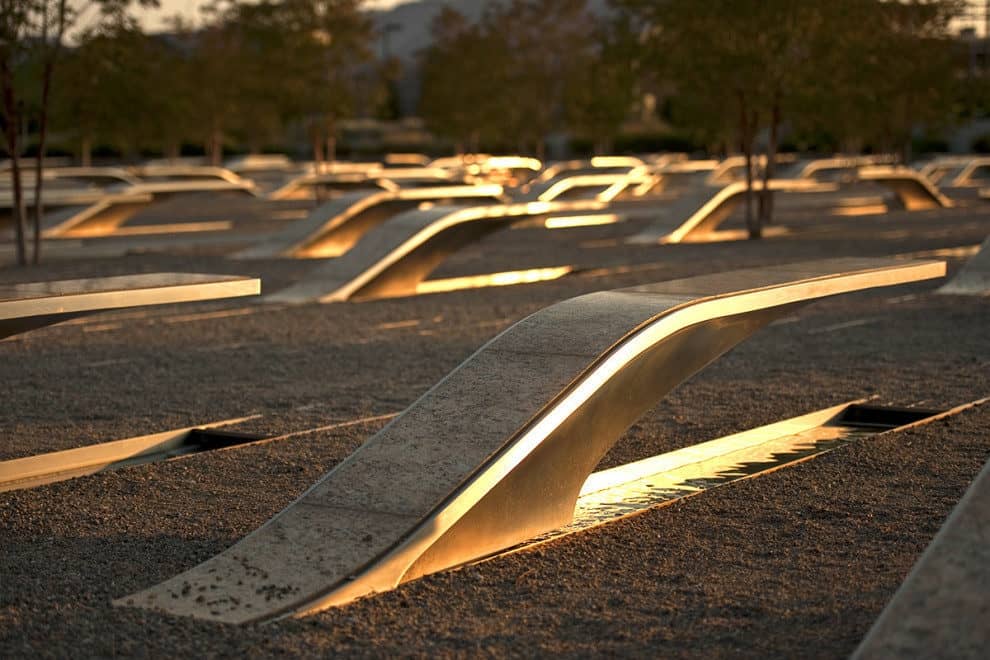 Each bench outside of the Pentagon in Arlington, Virginia, is dedicated to one of the 184 people who died in the Pentagon and American Airlines Flight 77.

To coincide with the 10th anniversary of September 11th, artist Sheryl Oring placed 2,753 empty chairs in New York’s Bryant park to remember the lives that were lost. 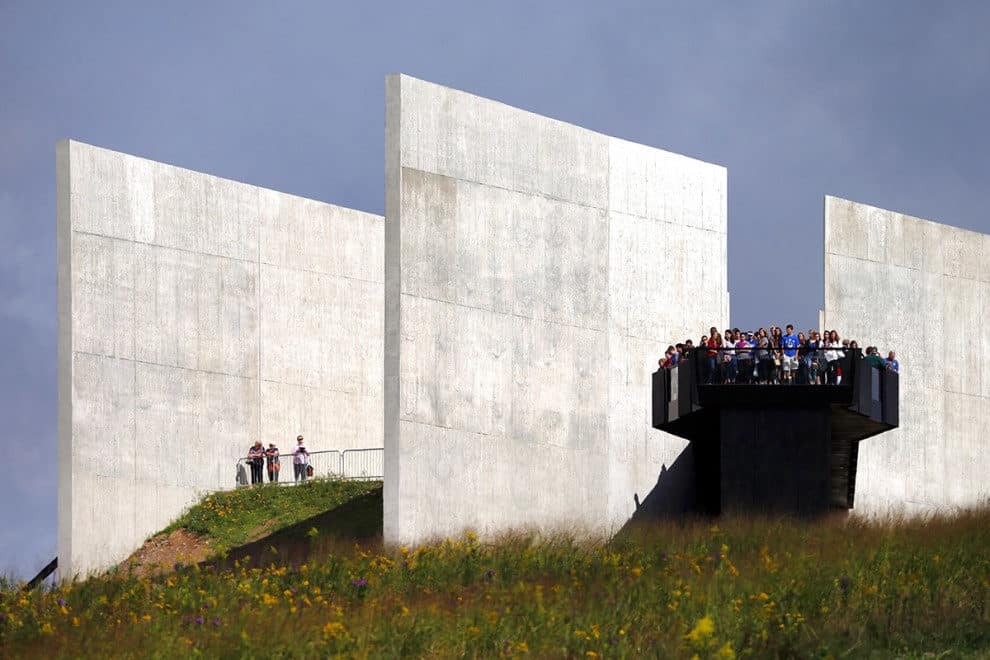 Visitors gather on the overlook at the Flight 93 National Memorial Visitors Center in Shanksville, Pennsylvania, on September 11th, 2015.