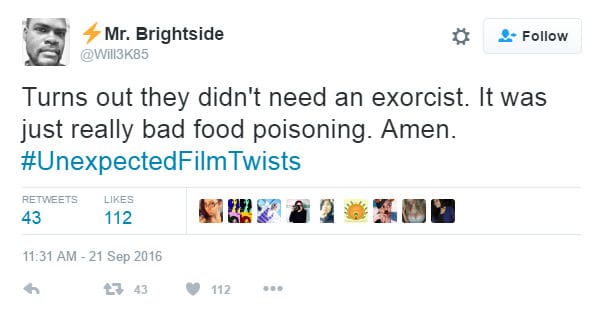 If we were to rearrange the scripts of a film, we would all probably put some crazy twists in it. So Twitter users have been sharing their own hilarious ideas for bizarre movie endings.

it was originally 102 dalmatians.

Sadly, one animal was harmed in the making of this film. 😭

Turns out they didn't need an exorcist. It was just really bad food poisoning. Amen. #UnexpectedFilmTwists

The Terminator doesn't come back….. #UnexpectedFilmTwists

Rose kisses Jacks frozen hand and her lips stick to him like a metal pole, sinking them both into the abyss. #UnexpectedFilmTwists pic.twitter.com/hNogRPMJMS

Hannibal Lecter is really a vegan#UnexpectedFilmTwists

E.T. could not phone home because Gertie had cut the damn cord with a pair of Playskool scissors.#UnexpectedFilmTwists @MidweekMinute