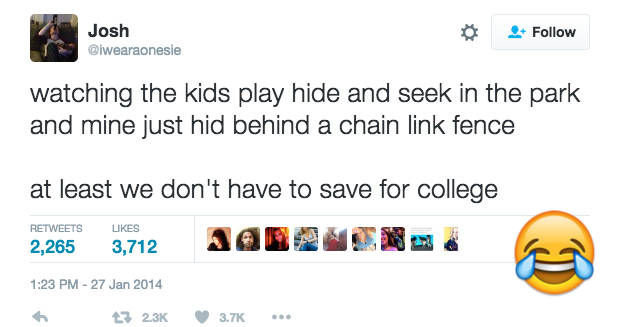 Daddy, don't worry, you can sleep. I'm making my own breakfast, how do you turn on the oven?

My son got mad at me yesterday and opened all the bananas in the house. What type of passive aggressive monster… pic.twitter.com/4p2Ucqh9NF

4yo son said the word prototype. When I asked him what it meant, he said "People are a prototype" and I was too scared to ask what he meant.

She's mad at the sun for going down #minimilah pic.twitter.com/wN9qb4N8tq

So: I asked our daughter to design the family Christmas card. pic.twitter.com/feDy7PMPVc

#13. This confusing sense of relief and disappointment.

at least we don't have to save for college

Me: They pay me a salary.

My son on the carousel horse in front of me.

3yo (in bathroom): Mummy, can I put this sticker on Daddy's card?
Me (in bed): Yes.
3yo: Will he love it?
Me: Yes. pic.twitter.com/TJepUORQwH