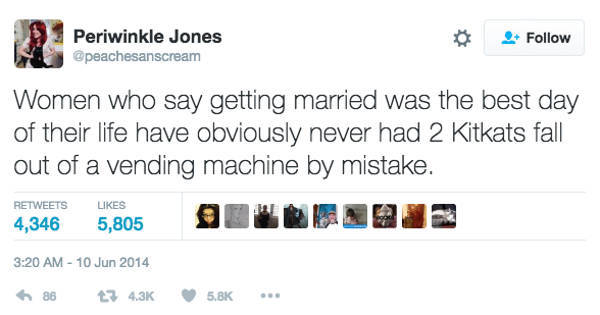 "So. When did you break the toaster?!"

Know those adorable idiosyncrasies you loved when first dating? After 20 years of marriage they become what the police refer to as "motive".

wife: Why is your back all scratched up?
[flashback to me chasing a raccoon after she told me to leave it alone]
me: I'm having an affair

I told my husband I wanted a hedgehog and he said we don't need a hedgehog. Long story short, we're picking it up on Thursday.

Women who say getting married was the best day of their life have obviously never had 2 Kitkats fall out of a vending machine by mistake.

Sorry. I was late because I had to find all the things that were in plain sight for my husband.

When a child whines and cries, you give it back to the mama, so…

*hands husband back to my mother-in-law*

Couples have an amount they can spend up to without discussing with each other. Mine is around $50. My wife's is around $643.27. Apparently

I'm at the level of marriage where "getting lucky tonight" just means we're having tacos for dinner.

[sitting at a table]

Wife: writes number on paper and slides it across.
Me: crosses out and writes new number

Me on deathbed: One last thing before I die?
Husband: *in tears* Yes?
M: Change the toilet paper roll
H: *pulls out my breathing tubes*