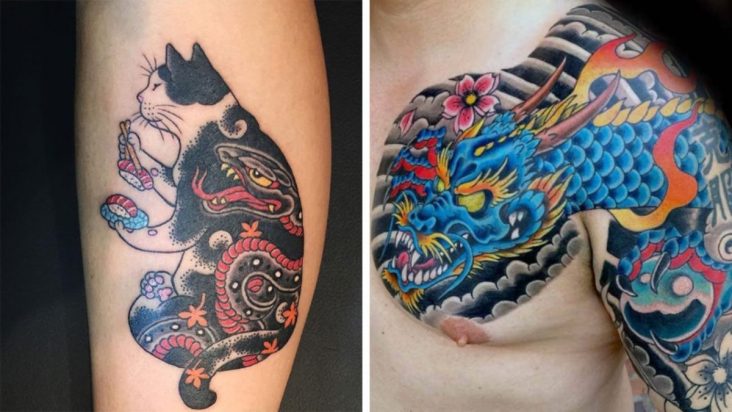 Traditional Japanese tattoos have been around for centuries and have evolved into a very unique type of design that people from all backgrounds love to get as their own personal expression.

Japanese tattoos are known to be intricate and detailed. They often take a long time, even months or years, to complete. We all have heard the stories of how painful getting a tattoo is – but does that mean you can’t get a Japanese yakuza tattoo? The answer might surprise you!

Koi fish, or carp, is one of the most popular designs you’ll find in Japanese tattoo designs. They symbolize luck and prosperity and can also represent a loved one. The design is very intricate and requires a lot of detail to get it right. Colorful Koi Fish often look like they were painted rather than tattooed.

You may have noticed a theme in Japanese tattoo designs – they often involve animals. Just about anything from tigers to snakes, and everything in between! Cats are popular because they symbolize good luck and fortune. You will find many cat tattoos throughout Japan with beautiful designs that take advantage of the unique shapes cats’ bodies provide for design work.

Samurai tattoos are an excellent choice for those looking for a traditional Japanese tattoo design. There are many different variations of Samurai that you’ll find, but they are often based on the type of person who has earned the symbol – whether it be just one Samurai or multiple warriors. These designs can take months to complete and are a beautiful piece of art when it’s finished.

In Japanese tattoos, words have a very unique meaning. Oftentimes they tell a story of who you are and what you stand for. Or perhaps it is just the opposite – a word that has meant something to you throughout your life or career. For the Japanese, it can be a quote from a parent or a sensei.

The Crane is a symbol of longevity and friendship. You will oftentimes see them together as two cranes standing back to back represent fidelity. A crane tattoo design can vary greatly in size and color since they are such delicate-looking birds. They look like watercolor paintings when done correctly, making them an excellent choice for those looking for traditional Japanese tattoos.

The Oni is a powerful figure in Japanese folklore and is often associated with strength and bravery. It was believed that when someone wore an Oni mask, they could project their own force of power onto the wearer. Demon Oni Mask tattoos are popular designs for those looking to project strength and courage.

Foo dogs are also known as Shishi and represent power and good luck. Foo Dogs tattoos can range from the famous Chinese Foo Dog statues to much more stylized tattoo designs that take advantage of the unique shapes and details these powerful creatures provide for design work.

Tigers are a popular subject matter for many different types of tattoo designs. They are powerful, fast, and have sleek bodies that provide excellent forms for artwork. Tigers can look very intimidating with their growling expressions or they can be portrayed as gentle creatures to symbolize power without aggression. Tigers are also symbols of bravery, which is why you will find them in many different cultures.

Flowers are symbols of rebirth and new life. These tattoos can come in the form of lotus flowers to full peonies, depending on personal preference. Since many flowers look like something other than what they actually are there is immense room for creativity when designing flower tattoos. In Japanese culture, flowers are often combined with Koi fish and dragons to really give a unique twist to these tattoos.

The Frog is a symbol of fertility, but can also represent a connection to the other world. The katakana for a frog in Japan is “kaeru”, which sounds similar to the word for “return”. This has given them symbolic meaning as a creature that returns from the dead or from another realm. It is a popular design among Japanese men because of this belief.

There are many different types of traditional Japanese women’s designs with beautiful black lines and fine illustrations that make these designs stand out from many others. Geishas are also a favorite tattoo design. These women can be shown in a kimono or another type of traditional dress, which is another reason why they are so popular with those looking for traditional tattoos.

Cloud tattoos are a traditional Japanese tattoo design of a cloud with a kanji symbol inside, which can represent many different things. For example, the words ‘kumo’ and “ame” have very different meanings, but they both fall under the term “cloud”. This design represents finding a nice balance between things in one’s life.

Many Japanese tattoos are combinations of kanji symbols, Japanese style art, and western letters. Many times these tattoos will have a personal meaning based on the symbols used in the design. Letters are also popular but can range from writing names to quotes or other significant words. The possibilities are endless with letter tattoos.

Courageous, fierce, and territorial are just some of the words associated with the lion. Getting this tattoo design represents these characteristics and the desire to show these traits off. It also gives a powerful look that can intimidate other people while still getting across a strong and bold appearance.

The Yakuza are notorious for inciting fear in others with unique tattoos and the Severed Head Tattoo is one of these designs. While the idea may sound gory and too graphic, the design is actually beautiful when rendered with care and by a skilled tattoo artist. It represents a man who is out to get what he wants no matter the price.

Turtles and tortoises represent longevity and eternal life in Japanese culture. They also have a connection to the moon which is why you see them as part of many different tattoo designs. These tattoos symbolize protection for those who get them, and if you’re a fierce Japanese man, you know you need all the protection you can get.

The sun symbolizes strength, power, and hope. The Japanese are no exception to this with the symbol of the sun being used in many different tattoo designs. It also represents change, which is why you may see it on certain Yakuza tattoos as well.

The lotus is a symbol of rebirth and new beginnings in many different cultures. Japanese men know this, which is why these tattoos are so popular among them. They can be designed with any flower or even just the lotus blossom on its own depending on personal preference.

The mask has long been a part of Japanese culture and is used for many different purposes. Most people associate it with Noh theater, but they are also applied in various designs. The mask represents mystery, of hiding one’s true identity, or pretending to be someone else.

This bird often represents the Japanese people themselves because of how they have been reborn again and again after hardships that include destruction by natural disasters or wars. Getting a Phoenix tattoo symbolizes a person’s rebirth and resilience.

The skull tattoo represents a man who understands the importance of death. This tattoo ranges from simple skulls to elaborate pictures with other designs in them. When it comes to Japan, you will often see these being used as part of Yakuza tattoos as a symbol of power and fear. This tattoo can show a man’s desire to be feared by others or it might even be used as a warning for those who get too close to him.

The snake represents wisdom and knowledge, but it also has a connection to the underworld. The Japanese have always believed in taking on challenges by going through hell first so this tattoo can represent going through tough times to get to the things that matter most.

The wolf has always represented the wild in various cultures, but it also has ties to courage, war, and protection. It’s meant to represent ferocity, power, and honor which are all traits that any Japanese man would love to have attached to his name.

The dragon represents power, transformation, resurrection, and wisdom to name a few traits. It can be designed with scales or even with flames to add more detail and make it stand out. Getting a realistic-looking one with wings is also a popular choice among the Yakuza.

This tattoo represents a place where a man can go to get away from the world and think about what he wants out of life. It may also represent his spiritual side if that is something important to him. The temple tattoo can be designed in full color or just an outline, depending on the man who gets it and his personal preference.

The wave tattoo is often designed with the rising sun to represent a rising empire. It can also be used in other designs to make an impactful statement about what you want for your future and goals in life.

The bamboo tattoo represents strength and resilience which are two traits that any man will love to have. It also denotes peace and a calm and centered outlook in life. Bamboo is a popular symbol that symbolizes flexibility, resilience, and adaptability.

The cherry blossom tattoo has ties to the samurai era. It was thought that this flower only lasted for about a week which would make it an attractive choice if you wanted something fleeting or short-term. However, the national flower became a symbol of beauty, fragility, and hope. A man with a cherry blossom tattoo is someone who understands the importance of nature and beauty in life.

The Japanese lantern tattoo is a popular choice among those who want something bright and eye-catching. It’s also a great way to represent the lights of the city which is an important thing for any man living in Japan. The lanterns started out as just paper, but they evolved into metal and other materials that can withstand the elements.

The peony is a popular flower in the East and it has ties to luxury and royalty. It’s also associated with victory and wealth so this would be a great choice for anyone who wants to put their best foot forward. This tattoo represents a man who has achieved status and rank.

What are Japanese tattoos?

You can define Japanese tattoos as tattoos that are inspired by the art that is seen in the country of Japan. This style is unique because it often has a lot of calligraphy work, deep imagery, and vivid colors.

What are the characteristics of a Japanese tattoo?

The characteristics of a Japanese tattoo include kanji, katakana words, and symbols from the culture. It’s also unique because there are no Western influences so images are not seen as cartoon characters or things that have been turned into a joke.

Why are Japanese tattoos associated with the Yakuza?

In the past, tattooing was illegal in Japan so this made it a risky endeavor. When it did happen, it often became associated with gangs and crime. However, there are some tattoo artists who have made it possible for people to get tattoos legally which has helped make tattoos more socially acceptable in Japan.

Can women get tattoos in Japan as well?

Women in Japan used to not be able to get tattoos because it was seen as something that only men should do. Today, there are tattoo artists who will work with women so they can create custom pieces of art for them. It’s still somewhat rare, but the stigma is slowly disappearing.