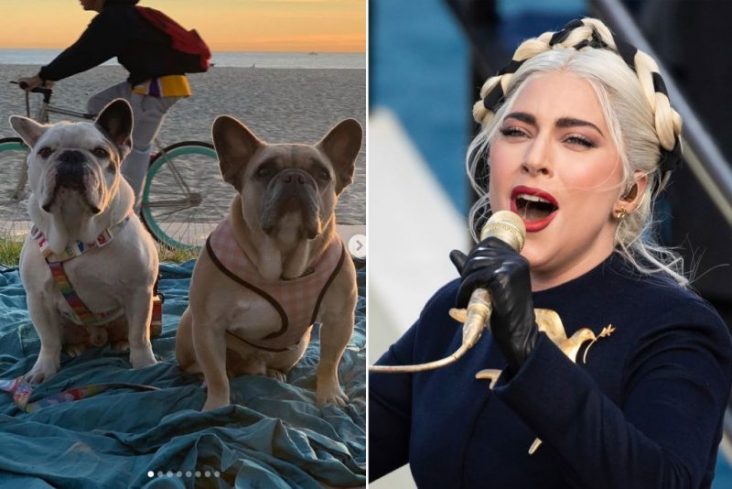 A woman brought the dogs to the LAPD’s Olympic Community Police Station, just northwest of downtown, around 6 pm, said Captain Jonathan Tippett, the commanding officer of the Elite Robbery-Homicide Division.

Tippett said the woman who dropped off the dogs appears to be ‘uninvolved and unassociated’ with Wednesday night’s attack.

The sudden breakthrough came just hours after Lady Gaga broke her silence over the incident in which armed men shot her dog walker and kidnapped two of her French bulldogs, calling her employee ‘a hero forever’.

The two dogs were seized when Fisher walked them in a residential area in Hollywood on Wednesday night. He was shot after a car pulled up alongside him, and two men demanded at gunpoint that he turn over the animals, the LAPD said in a statement.

Earlier on Friday, new footage emerged when Fischer was shot in the street by assailants who then snatched the pets, leaving him writhing in pain in the street.

They shot him once in the chest with a handgun, snatched Koji and Gustav, and fled. Miss Asia evaded them initially, then, once they had fled, ran back to Fischer as he lay on the ground.

Fischer survived the single gunshot and is in the hospital, where he is in a stable condition.