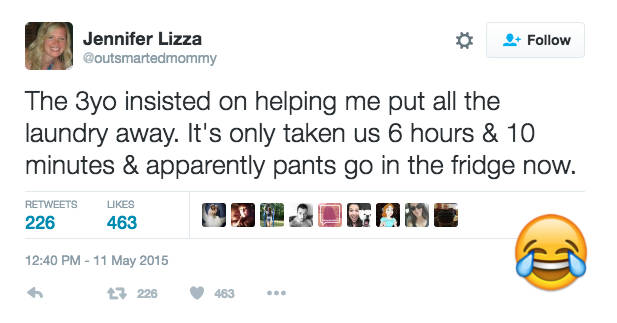 #1. How about food-stained pajamas?

Hey baby it's Friday night, why don't you get into something more comfortable that you can wear all weekend because we have no laundry left.

My family crest is just a big pile of dirty laundry.

#3. That’s one way to mentally prepare yourself for laundry day.

Sometimes when I do laundry I pretend the detergent is gasoline to make self feel better & also to prep for the day I burn this mother down.

a fun thing about being a parent is when people ask "where do you see yourself in 5 yrs?" you can confidently answer "folding laundry"

Teens had laundry duty for the last 2 weeks… All our whites are greyish pink and I just removed a fucking alpaca from the lint trap.

I bought my son a clothes hamper & then we laughed & laughed & he continued to throw his clothes on the floor.

#8. Fingers crossed there’ll be a PSA.

When the world is about to end, I hope we know about it in advance so I can stop doing laundry.

The 3yo insisted on helping me put all the laundry away. It's only taken us 6 hours & 10 minutes & apparently pants go in the fridge now.

Laundry Day is my Birth Control.

“Tumble dry low. Cool iron.”
Only one of these things is gonna happen. Let’s guess which.

5yo: Instead of putting my laundry away I'm just going to hate it.

40yo Me: "And sometimes you'll get up at 6am on Sunday just to do laundry!"

16yo Me: "Whatever."
*pops in New Kids cassette, sprays bangs

I did laundry this morning and didn't drop a single thing on the ground during the washer-dryer transfer. This is going to be a good week.

I like to do laundry in stages. For example, right now I’m in denial that I should be doing laundry.

One day I'll have a family and all of them will have pink crop tops because dad can't figure out how to do laundry.

Holy hell, I just found a documentary about ping pong on Netflix. Sorry, laundry. You'll have to wait.

I wonder how many laundry detergent commercials deliver a false number of impressions bc people get up from couch to put clothes in dryer.

Me: Why don't I ever have anything to wear
Me on laundry day: When did I buy 50 pairs of pajama pants