This is Leslie, a photographer from Ontario, Canada, with an obsession for snapping abandoned places.

On her Instagram, where she’s known as The Tourist, Leslie shares photos of all the spooky abandoned places she explores.

But last year a daring expedition would change her life.

She ventured into this run-down home, expecting to find broken furniture and peeling wallpaper as usual. But she quickly got the feeling she wasn’t alone in the building. 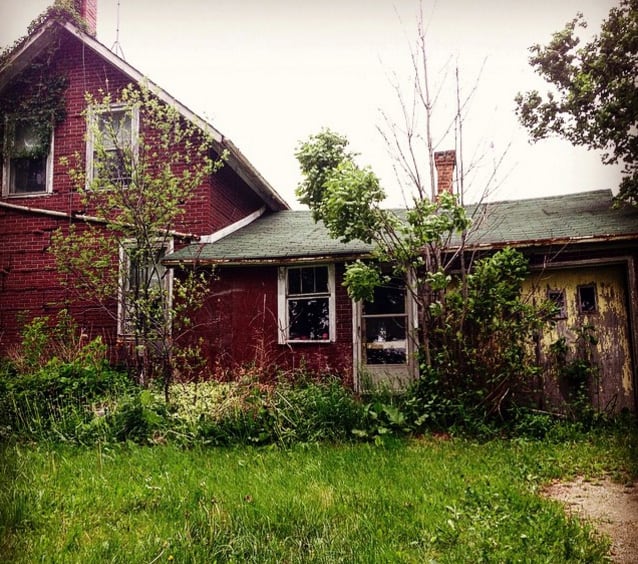 In the living room, Leslie came across an elderly man. He was missing his right eye and partially blinded by cataracts in his left. His name was Lawrence.

This is Lawrence. He lives in a house I had believed to be abandoned. The driveway is overgrown, the roof is caving in and the interior would lead anyone to believe this land had been deserted. I found him in the living room. He has a hard time getting around so he spends most of his time in there. Alone. He is missing his right eye and has cataracts infecting the left. Even after noticing a stranger essentially helping themselves to his life he was nothing but sweet and kind to me. He was even nice enough to let me take his picture which I will always treasure. He is a beautiful soul and I plan on visiting him a lot. I'm posting this picture in hopes that it will inspire at least one person to reach out to someone they may have lost contact with or perhaps just forgot about. These old souls are still full of life and I feel blessed to have met this one. #abandoned #thetourist #lost_souls #new_friends

Leslie wrote on Instagram, “He has a hard time getting around so he spends most of his time in there. Alone. Even after noticing a stranger essentially helping themselves to his life, he was nothing but sweet and kind.”

So Leslie decided to return to see Lawrence and cook for him, as he didn’t seem to be eating well (if at all).  She learned that he had suffered a stroke recently and waited 4 days for medical help. He just wanted a friend.

Tonight was the first of what will be many dinner dates with my new friend. Over the course of 3 hours we ate and drank and laughed. I was fortunate enough to hear about his life.. His struggles and his triumphs. This truly was one of the best experiences of my life & I can't wait to share another meal with such a gentle soul. #abandoned #thetourist #lost_souls #new_friends #twistedtea @twistedtea

Lawrence told Leslie his life stories, from the time a bull broke his hip to losing touch with his brother. She said, “He breaks my heart and puts it all back together in the same visit.” 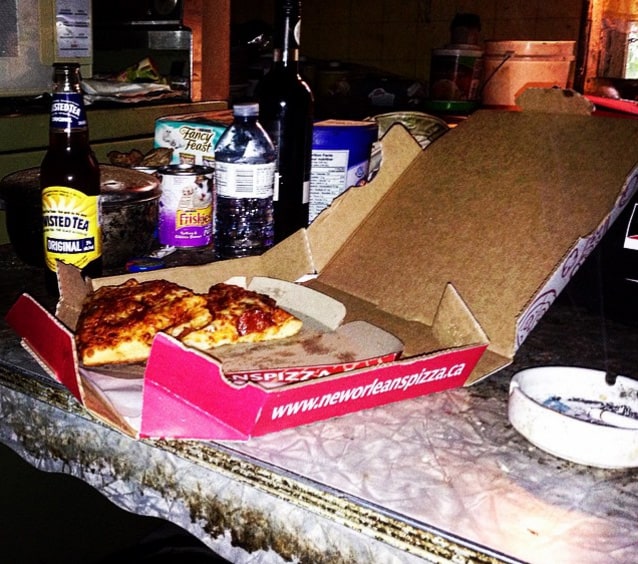 Leslie roped in some pals to help clear Lawrence’s house for him, removing his broken appliances and taking away bags of garbage so he can enjoy his home again.

“He is beyond grateful. After a few recent visits to the doctors, it’s apparent that his health is declining rapidly. These may be the last few months I have with my friend and I plan to make them as comfortable and enjoyable for him as possible.”

“He’s informed me of his funeral arrangements and has asked me to be there. I told him I wouldn’t have it any other way. He said the day I showed up was the best day of his life. The best day of my life was when I met him.”

Update: A few weeks ago my friend asked if I would go to a church BBQ with him … Our first outing!!! I was so happy he had asked me and couldn't wait to go. Tonight was our dinner date … The food was amazing .. Provided by the local farmers in the neighbourhood and way too much pie baked by all their lovely wives. It was great to see him out of the house and around the people he's known his whole life. Driving home tonight I couldn't help but think to myself how lucky I am to have this opportunity to be a part of such a wonderful persons life. My friend is truly a blessing xo #thetourist #lost_souls #new_friends #abandoned

Despite his failing health, Lawrence and Leslie made their first outing together to a church barbecue, where Lawrence reconnected with friends and family he’d lost touch with.

Well it's been a while since I've posted anything about this handsome fella so I figured I'd give everyone following his story an update. After a prolonged stay at two different hospitals after his last stroke, Lawrence is now living at a local retirement home and doing much better. He's safe and warm and seems to be fairly happy to be around some new people, although I know he misses home. I bring my dog Violet with me when I go for my visits, and she has now become a favourite around the home and she seems to enjoy herself thoroughly (indulging in yet another cookie as seen above). His birthday is coming up shortly (Valentines day) and we can't wait to celebrate with him, properly… With less pastry for the puppy. 🎂🎉🚫🐶 #thetourist

Lawrence moved to a retirement home after suffering two strokes, but Leslie continues to visit him (and brings her dog Violet, who Lawrence adores).

On his birthday, Leslie was there with a cake.

Leslie is now swamped with people asking how Lawrence is as her story goes viral and 10,000 people follow this heartwarming story.

“Today we spent some time outside where he could do his favorite thing ever, smoke cigarettes and listen to the birds. I told him how famous he is. His smile grew with each kind post I read him.”

After receiving numerous requests for an update on Lawrence… Here he is… Saying hello to all of his new friends 🙂 🙂 Today we spent some time outside where he could do his favourite thing ever… Smoke his cigarettes and listen to the birds. I told him about all the people who were asking about him and how famous he is 🙂 He's very happy to have some new friends following his story and his smile grew with each kind post I read to him. We both thank you for your beautiful words and thoughts and will post updates regularly for those who are following his story. Xo #abandoned #thetourist #abandoned_ontario

And Lawrence is still going strong.

Lawrence wanted me to tell everyone to have a happy and safe long weekend!!!! 💕 #thetourist #longweekend #abandoned_ontario

All thanks to Leslie’s kindness, Lawrence has been able to enjoy his life again, and she hopes others will do the same.

“I’m posting this in hope that it will inspire at least one person to reach out to someone they may have lost contact with or just forgot about.”

“These old souls are full of life and I feel blessed to have met this one.”

You can keep up with Leslie and Lawrence on Instagram