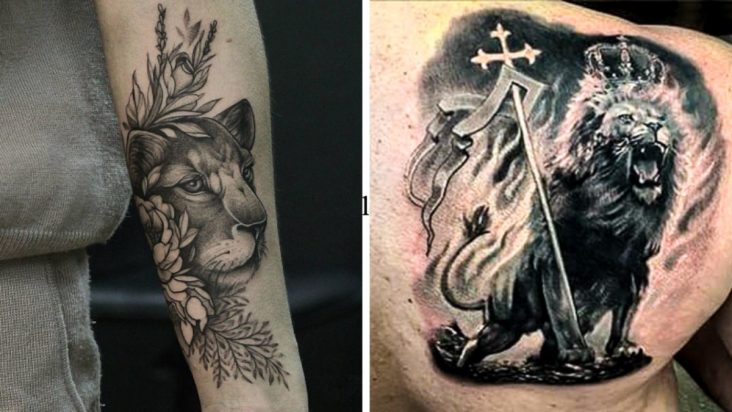 Lions are among the most popular tattoo designs for men because of their eye-catching appearance and powerful symbolism. These majestic creatures are often associated with dominance, power, confidence, and bravery. After all, they aren't named the King of the Jungle for no reason. Lions are versatile, allowing them to adapt to any tattoo style, such as geometric and tribal. If you're looking for your next ink inspiration, here are some of the best lion tattoos for men.

There's nothing better than a lion when you're thinking of getting a tattoo embodying power, courage, and confidence. Lions are a recognizable animal that many men like associating with because of their powerful and sophisticated aura. A lion chest tattoo is a perfect choice to show off your strength through art. It gives the artist more space, allowing them to make the piece as detailed as possible.

A lion's face is one of the coolest in the animal kingdom. That's why it makes for an excellent tattoo for men. This ink design is perfect for you if you're an animal lover or want to get a tattoo in a photorealistic art style. Although some lion tattoos might seem intimidating, a lion face tattoo shows the animal's more mysterious, curious, and peaceful side. People often describe a lion's face as majestic or wise looking. Get the lion's face tattooed on your forearm, chest, or back to show off the details.

There are numerous options when it comes to picking a tribal lion tattoo design. For instance, if you are of tribal heritage, getting a lion tattoo in your tribe's traditional style would be an excellent choice. On the other hand, African tribal art usually includes traditional bold black ink and geometric figures. Meanwhile, the classic and original tribal tattoo style consists of curved lines, giving your lion tattoo life and movement. Regardless of the tribal tattoo style you choose, tribal lion tattoos are perfect for wild men, showcasing their fierceness through art.

A lion with a crown tattoo plays into a meaningful and good-looking piece for men. It's best suited for men with families, showing off their strength and independence. Plus, it indicates that they're in control. This tattoo design can also have a Christian meaning, as the Bible refers to Jesus as a king and a lion. In England, a crowned lion symbolises courage, nobility, royalty, strength, stateliness and valour, which is why it is an image that is featured prominently in British Royalty.

The female lion or the lioness is the male lion's right hand. Lionesses are robust animals perfectly suited to be tattooed. Besides looking fierce, lionesses hold powerful symbolism. They're often associated with profound aspects of human nature, like perseverance and loyalty. Although female lions are considered feminine, they also make an excellent tattoo for men. They work either individually or in conjunction with existing lion tattoos. Whether you get a lioness tattoo prominently placed in areas like the chest, neck, forearm, or private places like your chest, it will serve as a powerful statement of your strength and determination.

Lion tattoos don't need to be big to have an impact, as smaller versions can look just as striking and fierce as the large ones. Although small tattoos are more prevalent among women, they also work well for men. For additional impact, you can have the artist incorporate white ink into the lion's eyes. The best placement for small lion tattoos is around your hands, inner arms, neck, or behind the ear.

Christian men looking to get a meaningful and masculine tattoo while showing off their wild side should consider getting a lamb and lion tattoo. That's because, in the Bible, both the lion and lamb often get associated with Jesus Christ. After all, Jesus Christ is also referred to as the ‘Lion of the tribe of Judah.' The phrase refers to Jesus Christ's heritage, a part of King David's family line. Lions symbolize his conquest of death. On the other hand, the lamb represents his sacrifice.

If you're looking for a unique and modern take on a lion tattoo, consider getting a geometric lion tattoo. This art style gives tattoos a contemporary touch. That's why if you want to expand your inkings, consider abstract and non-traditional ink like this one. There are many different options when it comes to geometric lion tattoos. So all you need to do is explore your creativity. Shaded triangles will give this design more depth and complexity.

9. The Lion of Judah Tattoo

This tattoo shows a lion wearing a crown and holding a scepter. It's a versatile design that has different meanings. Firstly, many consider it a Christian symbol as Jesus Christ is often referred to as the Lion of Judah in the Bible. But the design also has features of the old Ethiopian flag, making it an excellent design choice for people of Ethiopian heritage. For this reason, it's also become a meaningful piece for followers of Rastafarian religion and culture.

A roaring lion tattoo is a powerful piece that shows your strength to the world. After all, lions roar to mark their territories. So a roaring lion tattoo should have the same intimidating vibe since it shows off the beast's wild side. The best placement for this tattoo is around larger areas like the chest, thigh, and back. If you want to show off your wild and daring side, consider this tattoo design.

Consider getting a lion and cub tattoo if you're a father and want a piece dedicated to your kids. This piece symbolizes the protection between the father and child, as lions are known to defend their pride. For this reason, this design has become a popular choice for new dads. It's a tattoo that shows how important family is to you. So if you want to show off your pride and how you'll keep the family safe, get a lion and cub tattoo.

For a modern take on lion tattoos, consider getting a black and dot lion tattoo. This piece is geometric and symmetrical, while the dots add an extra edge of grit and creativity. This tattoo method works best with intricate lion tattoo themes like a mandala or geometric lion tattoo. It's best used for the face of the lion. Since the tattoo's dotted, the best color scheme for this is traditional black ink.

You can make your lion tattoo more majestic by having it in blue ink, as the color blue represents royalty. The hue adds on to make the piece more vibrant and attention-grabbing. When getting a colored tattoo, it's best to go all out. So you can make the tattoo more eye-catching by having the lion's mane done up in a funky way, making the design modern and spunkier.

Although many men prefer getting actual lion tattoos, a popular lion-themed variation is lion eyes tattoos. Besides being unique and looking fantastic, eye tattoos are considered to give wearers luck in many cultures, as the eyes indicate you're being watched over. Plus, the eyes are considered a window to the soul.

Chest tattoos provide artists with a larger canvas to work with, allowing a more elaborate, detailed, and extensive design. Getting a lion tattoo on the left side of your chest symbolizes courage and bravery. After all, it's over your heart.

If Leo the lion is your zodiac or star sign, this could be a perfect pick for you. This tattoo consists of a lion's face tucked within Leo's symbol. Leo's symbol is a gorgeous glyph, consisting of a curved design signifying the form of a lion. A lion's face and the zodiac symbol make for a great combination as they represent natural-born leaders. To add a personal flair to it, add your birthdate on top of the tattoo.

Hand tattoos are excellent areas for masculine designs like a lion tattoo. That's because others will see the piece whenever you shake their hand. Men can get a lion tattoo on their right hand when they achieve a long-time goal. A lion tattoo on the hand can also symbolize self-control, such as overcoming an addiction.

Chinese lions or guardian lions are believed to protect their surroundings. For this reason, many Chinese temples have stone lions in front of them. Besides having deep cultural roots, this tattoo is perfect for adventurous men as the Chinese lion is colored in exciting hues. The best part about this tattoo is that its mane is made of curled-up patterns giving fluidity to the pieces, making it a good choice for the biceps and upper arm.

Winged lion tattoos look fantastic and potent, but they also carry deep meaning. This unique take on the majestic creature represents St. Mark in Christianity. For this reason, a winged lion tattoo would make an excellent choice if you like St. Mark's gospel.

Forearm tattoos are always a popular choice. A small lion tattoo looks better on the inner arm, while a larger design is better suited for the forearm. A shirt sleeve can easily cover this tattoo placement.

Full sleeve tattoos stretch from the shoulder to the wrist. Usually, ink lovers add different tattoos to a sleeve tattoo, telling a unique story. A lion-themed sleeve tattoo is perfect for men to show off their wild side and strength. The best part is that a lion tattoo anchors sleeve designs well since it's already eye-catching and dramatic.

If you're looking to get a lion tattoo and make a significant impact, consider a back lion tattoo. It gives the artist enough space to create an extensive and detailed design of a lion's head or a full version.

A popular placement for lion tattoos among men is the shoulder. That's because it's one of the most masculine areas of a man's body. Shoulder tattoos usually cover the bicep and may extend toward the collarbone or chest. A lion tattoo looks fantastic on the shoulder since both are often associated with strength.

Lion finger tattoos have become a popular choice among men in recent years. A great thing about a lion-themed finger tattoo is that the lion's head fits perfectly within the narrow spaces of your finger. And they just look really cool.

The fluidity of this design makes the piece artistic. It consists of a wavy and curling tail and mane. Plus, paws spread out into twirls. Overall, it's a design conceptualized on the Rampant Lion. It's the emblem of the Royal Scottish Standard and is mainly seen in the Belgian and Scottish flag. This tattoo symbolizes strength for younger men and wisdom and nobility for older gents.

What Do Lion Tattoos Mean?

Lions are associated with bravery and pride. They signify a fearless individual, overcoming life's challenges with courage.

Lion tattoos have been a popular design among men since they look cool and are meaningful. These wild cats represent strength, power, and courage. Plus, they look good in any art style, whether it's modern or traditional. They're perfect for men looking for a bold and masculine ink design.

Where to Put a Lion Tattoo?

When men get a lion tattoo, most have them designed as a sleeve. But other common areas are the arm, chest, ribs, leg, and back. Meanwhile, most women get lion tattoos on their back, stomach, or thighs.

How Much Does a Lion Tattoo Cost?

Lion tattoos need detailing, making them more expensive than your average tattoo design. The average cost for a medium-sized lion tattoo is around $150 to $400. The bigger and more detailed the tattoo is, the more expensive it will be.