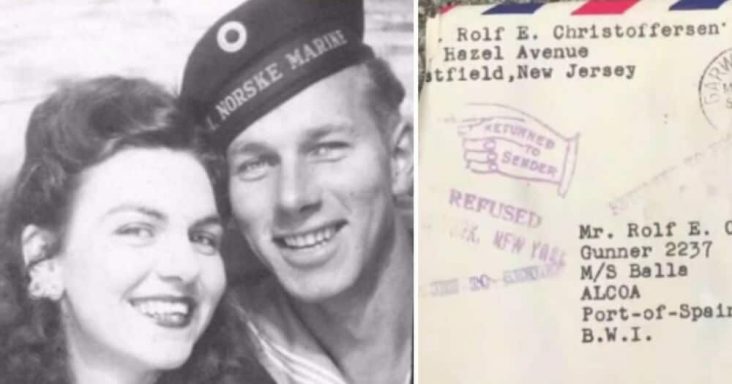 “That is what you are to my life, the sun about which everything revolves around me.”

A love letter lost in a gap under the stairs in a New Jersey home finally reached its receiver – 72 years after it was written.

Melissa Fahy was renovating her newly purchased home when a piece of paper peaked under her staircase. Little did she know that her discovery would make her a part of a decades-old love story.

The letter which was postmarked May 1945, was supposed to reach Rolf Christoffersen who was at the time a sailor in the Norwegian Navy. His wife, Virginia, wrote the letter and described her longing and admiration for her husband.

In the letter, Virginia also talked about the baby that she and her husband were about to have. The envelope was unfortunately marked “return to sender” and never made it to her husband.

Fahy immediately wanted to find the Christoffersens to hand them back the letter. So like the modern equivalent to reaching out to people, she utilized Facebook.

With the help of the web app’s users, she was able to locate the couple’s son who lives in California.

Upon receiving the letter, the couple’s son read it to 96-year-old Rolf. Coincidentally, Virginia died six years at the time her letter reached her husband.

“In a way, I guess it’s his wife coming back and making her memory alive again,” Fahy stated in an interview.

The letter also found its way back to its receiver in the most appropriate time – Mother’s Day. “It’s Mother’s Day and reading her words reminded me just what a wonderful person she was and how much she loved us,” the couple’s son said.