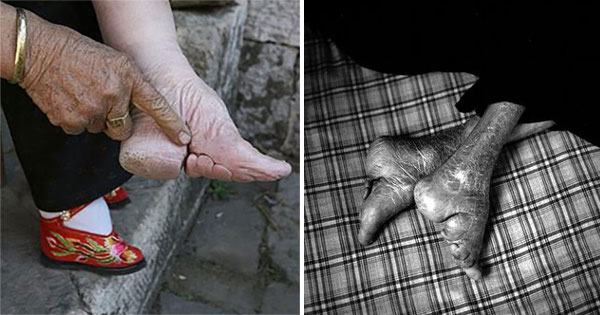 The Chinese tradition of foot binding, or toe curling, is one that has been around for centuries. This practice continued well into the early 20th century and was often practiced by aristocratic women as well as those from poorer families. Bound feet were considered to be a sign of beauty and wealth because only those who could not work had time to care for their feet.

The traditional foot binding process started when girls were approximately four years of age. A girl’s toes would be curled under and then bound with either cloth or silk bandages, starting at the ball of the foot and wrapping around the heel, finishing at the top of the foot. This would cause all of her toes to bend under the sole of her foot, leaving only the smallest portion of the toes exposed to be painted in a bright color. This process would sometimes result in infection or even death.

In order for a woman with bound feet to go through life she required assistance from those around her. A girl with bound feet could not walk without leaning on something or someone, thus binding feet was a form of isolation. In order to prevent this from happening, girls with bound feet would wear special shoes that would keep their feet from touching the ground and make it easier for them to walk. These shoes could be as simple as a piece of wood or a complex design made up of layers of leather, cloth, felt and other fabric types.

Most of the time women would live their entire lives with bound feet and only take the bindings off to wash them or when they died so that their bodies could be prepared for burial.

Although the practice has been banned since 1912, many women continued with their bindings and today a number of elderly ladies in China still have deformed feet from binding.

She was born into a wealthy family and married a rich husband, in part thanks to her much-admired tiny feet.

Zhao, below, had her feet bound when she was 15, which is relatively late for most girls. She was a farmer and spent hours on her feet, spending years in agony.

As young as age 4, girls had their feet bound by their mothers, grandmothers, or sisters, because the young bones are soft and easier to manipulate.

Each toe would be broken to curl under the foot, as close to the heel as possible, and would be unwrapped and rebound again and again to stop the feet from growing.

The practice was so painful that women would often be bedridden. The long bandages used to bind the feet were only washed once or twice, and many women suffered horrific infections, even having to cut off parts of their flesh to allow pus to drain.

Women would make their own shoes for their tiny feet, using intricate embroidery to create colorful, elaborate shoes that they would then wear to their weddings.

After the communist revolution, women like Zhou, above, were shunned because of their small feet as they couldn’t do physical labor.

As they couldn’t contribute to the “communist dream”, many well-born women lost all of their riches during the revolution, leaving them penniless and painfully deformed.

Zhou regrets binding her feet, saying that she can no longer dance or even move properly. But, years ago, she had no choice but to bind her feet if she wanted to secure a good marriage.

Despite all the negative aspects of foot binding, some people still saw it as an art form and put in hours of work on their feet before they were done. To some people, beauty was pain and having tiny feet showed others that you were willing to go through the pain of foot binding in order to be beautiful. Fortunately, this practice has lived out its time and has now almost completely disappeared in China.