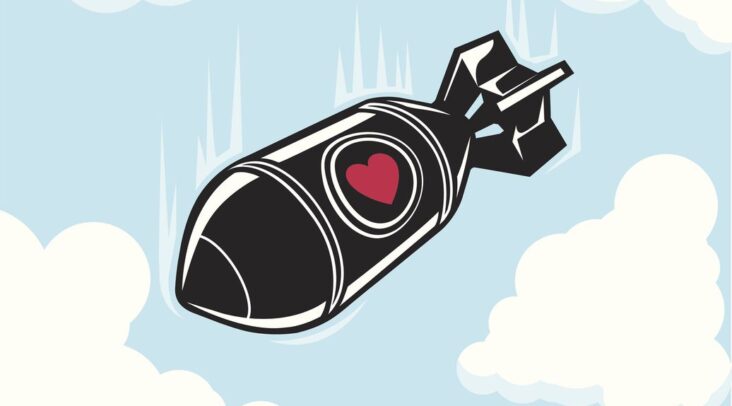 You might think you found the perfect person, and you’re moving at lightning speed. They text and call constantly, they want to see you all the time, and they shower you with gifts and affection.

But then something changes. You start becoming more aware that this person now wants to control your every move, will turn on you in an instant, and make you feel terrible. Let’s talk about love bombing.

What is Love Bombing?

Love bombing is when someone acts like they’re in love with you by showering you with gifts and displays of affection, in order to manipulate you.

Love bombing is not actual love. It’s a psychological manipulation tactic used by narcissists to gain control over their victim.

The goal of Love Bombing is to make you feel like you’ve met your soulmate, and no one will love you as much as them. During love bombing, everything might be perfect and dreamy and you’ll feel on top of the world.

The love-bombing period can happen fast, starting from just a few days, and lasting up to several weeks or months. During this time, the narcissist showers their target with attention and affection in the hopes that the target will form a strong emotional attachment to them. The narcissist typically idealizes their target during this time, convincing the person that they are soul mates, that they understand them better than anyone else can, etc. Often, this behaviour will be subconscious and a symptom of their narcissistic personality disorder.

Once love-bombing is successful, the narcissist then implements “devaluation.” During devaluation, the narcissist uses a variety of methods to withdraw their attention and affection, or they actively punish the target for expressing any needs or desires.

This can include: ignoring phone calls and texts, withholding sex and affection, purposefully doing something to upset the target and engaging in intermittent reinforcement with good and bad behavior.

Love bombing is insidious because it is so effective. Those who are the target of love bombing may find themselves questioning whether it is actually happening, because the narcissist can appear so genuine at first.

Signs that someone is love bombing you

There are a number of different signs that someone is love bombing you. Here are the most important ones – the more of these are present, particularly if they happen fast and early in the relationship, the more likely it is you being subjected to manipulation tactics by a narcissist.

1. They call and text you excessively

The red flag here is if it’s both relentless and one-sided. Take note if you can’t catch a break from their constant messages and are feeling overwhelmed. It definitely is not normal and you should know that something is up.

2. They shower you with gifts

It’s hard not to appreciate a gift, especially if it’s expensive or extravagant. But this is precisely why gifting is such an effective tool for the love-bomber. The gifts are not about generosity or because they care about you. They’re to buy your love and affection so you think highly of them, and more importantly, to make you feel indebted to them.

3. They endlessly compliment you

Love-bombing is about making you feel special. It’s why they constantly compliment you, making sure to point out how great you are all the time. But this is not because they actually think of you highly. Rather, it’s their way of stroking your ego so that you’re on cloud nine and constantly smitten with them.

4. They demand your undivided attention

5. They ask for commitment early in the relationship

A real relationship takes time to develop, so anyone who pushes for marriage or moving in together early on is probably interested in something else. If you’ve only known each for a few days or weeks and they are suggesting these things, run for the hills.

Love bombing is all about control. Nothing spells control quite like the person who needs you far more than you need them. You’ll see this in action if they constantly need to know where you are, what you’re doing and who you’re with.

7. They insist you are soulmates and meant to be together

Sometimes things can get weird fast with a love bomber. They might say that God told them in a dream that you were both meant to be together, or that he had a vision you were both with children and married in the future.

How can love bombing be avoided?

People who are trying to love bomb you will often pressure you into making decisions that seem significant, such as moving in together or getting married. If someone is pressuring you like this, it’s a good idea to slow things down and spend some time alone with your thoughts. The more time you spend thinking about what you’re doing, the easier it will be to tell if they’re love bombing or if they genuinely care about you.

What to do if you’re being Love Bombed

If you’re being love bombed it’s important to remember that this is a technique used by manipulative people in order to get what they want. It might seem sincere at first, but trust your gut if something doesn’t feel right. Love bombers are often great at pretending, so it can be hard to tell when they are trying to manipulate you.

If you’re being love bombed, it’s important to acknowledge what is happening and make a conscious decision about whether or not you want the relationship to continue in this vein. If someone is constantly showering you with attention, gifts and compliments, it can seem awesome at first but it’s unlikely they are doing all of this out of the goodness of their heart.

If you’re not interested in having a love bomber in your life, be firm and make it clear that you are no longer willing to be used. Love bombers hate rejection, so they will try guilt-tripping or pressuring you into staying with them. Don’t fall for this. There are far more people out there who will appreciate you for who you are – don’t waste your time on someone who uses love bombing as a way to manipulate and control you.