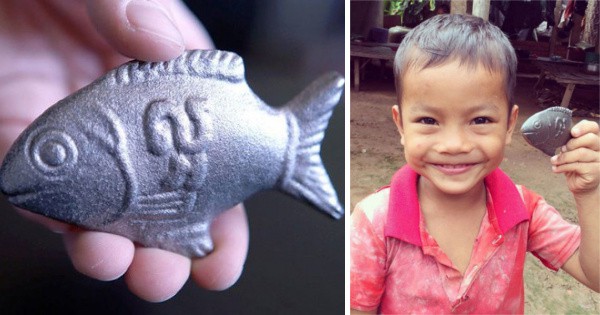 It may look like a toy or a decorative item, but this little fish could very well solve the global problem of iron deficiency.

Its Canadian inventor Dr Christopher Charles hopes that the Lucky Iron Fish will help eliminate iron deficiency in the world.

Worldwide, 2 billion people are suffering from iron-deficiency anemia, which in some cases can even lead to death. It’s the most common nutritional problem and is very easily remedied by supplements — something that is not available to and affordable for many.

This is especially true for poor farming families in rural Cambodia. Almost half of the Cambodian population is iron deficient.

Six years ago, Dr Charles traveled to Cambodia as a science grad, where he found children too small and weak for simple playtime, and suffering from slow mental development. Adults didn’t fare any better: they were plagued by painful headaches that left them unable to work.

And with barely enough to put food on the table, these families couldn’t even afford the daily iron tablets that could improve their health tremendously.

So Dr Charles came up with the idea of a wedge of iron to supply their dietary needs. All they would have to do is cook with it.

Shaped after a fish, a symbol of luck in Cambodian culture, the cast iron object provides 75% of an adult’s daily recommended intake of iron.

The doctor explains the process of using the fish: “Boil up water or soup with the iron fish for at least 10 minutes… you can then take it out. Now add a little lemon juice which is important for the absorption of the iron.” Food cooked this way does not taste differently, and the fish itself lasts for many years.

More than 2,500 people are now using the fish in Cambodia. And after just 9 months of using it every day, a 50% decrease in anemia has been observed, as well as an increase in users’ iron levels.

But the Lucky Iron Fish is not stopping there. Dr Charles plans to roll out the life-changing lump of metal to other developing countries.

The shape of the iron piece will be changed to be culturally appropriate for the country it will be used in.