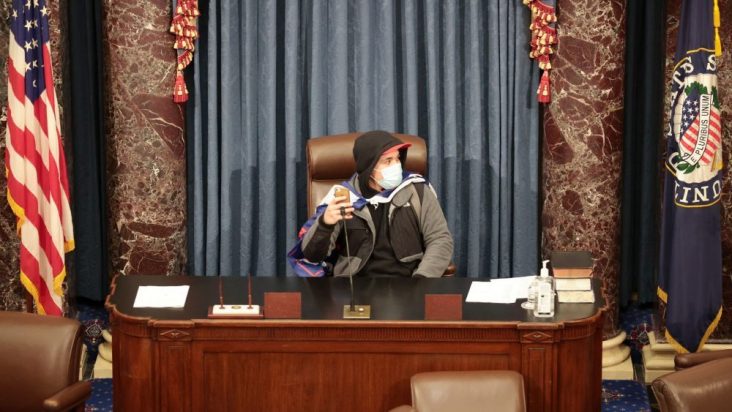 The heaviest punishment handed down thus far among the hundreds of Capitol riot cases was a Texas man who was found guilty of assaulting the U.S. Capitol with a holstered handgun, helmet and body armour. He was sentenced to 87 months, or more than seven years, in jail on Monday.

According to a court document, according to allegations made by the prosecution, Guy Reffitt discussed his intention to drag House Speaker Nancy Pelosi out of the Capitol building by her ankles “with her head hitting every step on the way down” with other militia members of the Texas Three Percenters militia group.

Reffitt was the first person to face trial for the attack on the joint session of Congress on January 6, 2021, during which supporters of then-President Donald Trump shut it down in order to confirm Joe Biden’s victory in the 2020 election.

Reffitt was also given three years of supervised release following his jail term and was mandated to pay $2,000 in restitution by U.S. District Judge Dabney Friedrich, who presided over the jury trial.

Prosecutors from the Justice Department suggested a 15-year prison term for Reffitt, who has already served about 19 months in jail. In order to prevent the certification of the Electoral College vote, they said he was a paramilitary group member who planned to haul members out of the building and seize control of Congress.

The probation division of the court had computed sentencing guidelines that called for a sentence ranging from nine years to eleven years and three months. An “upward departure for terrorism” was justified, according to the prosecution, in Reffitt’s case.

Before Reffitt, two individuals who admitted to attacking police officers at the Capitol received sentences of five years and three months.

Clinton Broden, Reffitt’s defence counsel, argued for a sentence of no more than two years in jail. Broden pointed out that Reffitt didn’t break into the Capitol or fight any police officers.

Videos show the altercation between Reffitt and a crowd of individuals who approached outnumbered Capitol police officers on the west side of the building.

Prosecutors claim that when Reffitt charged at the officers, he was outfitted with a Smith & Wesson revolver in a holster on his waist, zip-tie handcuffs, body armour, and a helmet with a video camera. He backed off after being pepper sprayed in the face by an officer, but other rioters waved him on and eventually broke into the building, according to the prosecution.

Prior to being found guilty on all five charges of his indictment by a jury in March, Reffitt declined to give a testimony during his trial. He was found guilty by the jury of interfering with police outside the Capitol, obstructing the joint session of Congress, and threatening his two teenage children if they called the police.

Jackson Reffitt, Reffitt’s 19-year-old son, stated that his father informed his sister, 16, and him that they would be considered traitors if they reported him to the police and that “traitors get shot.”

Prosecutors claim that Guy Reffitt belonged to the Texas Three Percenters paramilitary group. The Three Percenters movement addresses the fallacy that just 3% of Americans participated in the fight against the British.

Reffitt resided in Wylie, Texas, a suburb of Dallas, with his wife and kids. Along with Rocky Hardie, another member of the militia organisation, he took a car to Washington, D.C.

Hardie said in court that both of them had weapons holstered when they went to Trump’s “Stop the Steal” rally prior to the melee. In addition, Hardie claimed Reffitt provided him two sets of zip-tie handcuffs in case someone needed to be detained.

Federal offences connected to the riot have been charged against more than 840 individuals. Of them, over 340 have entered pleas of guilty, primarily to misdemeanours. Nearly half of those who received sentences—more than 220—were for prison terms. Trial dates for over 150 others go all the way until 2023.

Reffitt is one of seven defendants in the Capitol incident who have so far received a jury trial. On every charge in each of their individual indictments, the jury found all seven of them guilty in unanimity.