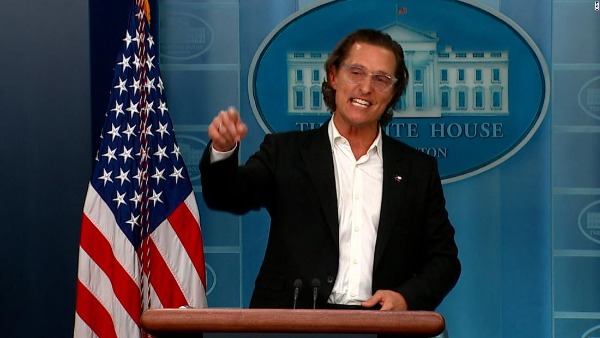 Hollywood A-lister Matthew McConaughey does seem to aspire to be president.

The “Dazed and Confused” actor, who has toyed with the idea of running for governor of his home state of Texas, said this week to conference participants in San Francisco that it would “be arrogant not to” explore a bid for the White House in the future.

McConaughey did not specify his period but did not exclude 2024. He has never formally associated with any major party.

“Yeah, I’ll consider it in the future, I’d be arrogant not to, absolutely I would consider it,” said McConaughey, who won an Oscar for his role in “Dallas Buyer’s Club.” “If I got into any form of politics I’d be remiss not to also go in as an artist and a storyteller; help put a narrative together. You’re the CEO of a state and a nation, a lot of compartmentalization and choices to be made. They scare me but I’m not afraid of ’em.”

The annual conference, which is put on by the internet company Salesforce, is well-known for drawing famous speakers who talk to Silicon Valley liberals. McConaughey commented during a conversation with Salesforce co-CEO Marc Benioff on gun control, the school shooting in Uvalde, Texas, and his general political views.

But he said he would do it rather unwillingly if he ran for president.

McConaughey, 52, said:“If that happened to me I would be pulled into it. If I’m living right, which I’m trying to, we get pulled into things … it’s inevitable. I didn’t choose it, it chose me.”

Although he acknowledged the country’s tremendous political divisiveness, McConaughey asserted that there is potential for someone who can appeal to rational people on both sides.

“There’s definitely a greater divide now than there has been,” the “Failure to Launch” actor said. “One thing is we have to admit that part of that divide is the Kool-Aid we’re being sold. The divide is not as thick as we’re being sold; most of us are much more near the middle than we’re being told.”

Following the May 24 school tragedy that claimed the lives of 19 kids and two instructors, McConaughey advocated for increased gun control measures. He said there are significant differences between the Second Amendment positions of the two major parties.

“[To] the Left, this is about regulation, this is about keeping the weapon out of the bad guy’s hand, [to] the Right, this is about mental health, but each one of them would put a period after their argument,” he said. “You’re right, just put a comma after your argument. Both of your arguments are much closer to the solution than each of them independently.”

McConaughey, his wife Camila, and their three children moved from Malibu to Texas despite tending to seem liberal on some subjects because the values of the Lone Star State align with their own, Camila said in an earlier interview.

The Brazilian model and fashion designer stated, “It’s been great. It really embodies our belief system, especially the ones I grew up with, like going to church every Sunday, saying ‘yes ma’am’ or ‘no, sir.’