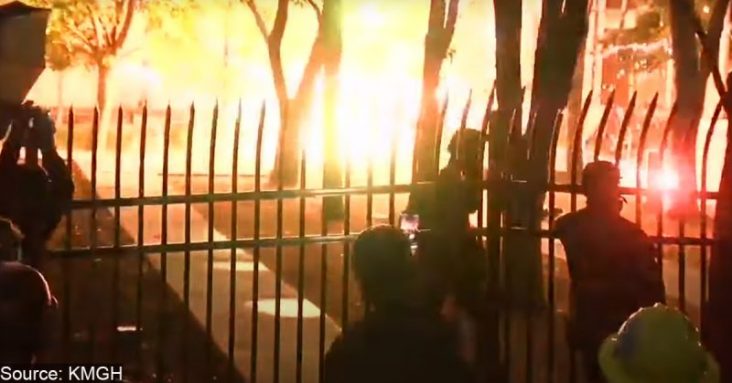 Aurora, Colorado Mayor Mike Coffman is asking the city’s police force why it did not do a better job defending the municipal courthouse from a riotous mob on Saturday.

The mayor was quick to add though, that he  doesn’t want any outside help sent to his city.

On Monday, Coffman expressed concern on why Aurora police had allowed protesters to break down the newly-installed iron fence around the city’s municipal center. The rioters also smashed windows, and set the inside of the municipal courthouse on fire.

“I understand that our police department chose to show restraint using non lethal munitions. But now these individuals smell weakness. My concern is that they will be back again and again until they achieve their goal,” the mayor said.

Coffman said he is requesting a briefing on the incident by the interim chief of police.

“I will be asking why our court house was not adequately defended,” Coffman stated.

“My question to them is can we do better? Is it possible to do better and adjust that balance,” Coffman asked. “Where we are not putting officers at risk, and we are not facilitating a confrontation, but that we are protecting our courthouse and other buildings here.”

“Aurora is not Portland. Aurora, under my watch, is not going to become Portland. And so what do we have to do to deal with this?” Coffman said in a CBS4 interview.

Mayor Coffman said he went to the Aurora Municipal Center Sunday to survey the damage done after protests over the death of Elijah McClain turned violent.

“[After] the protest was over about 150 stayed behind. Those who remained sought to bait the police into a confrontation and to destroy as much public property as possible. Make no mistake about it, the ones who remained behind were not protesters but simply using the protest as a cover for their violent actions,” the mayor tweeted on Sunday.

The mayor noted that vandals smashed through all but one window on the south side of the courthouse.

City Council Member David Gruber was also on site Sunday morning to see the damage first hand. He said there were people protesting for justice and then there are others simply looking for confrontation.