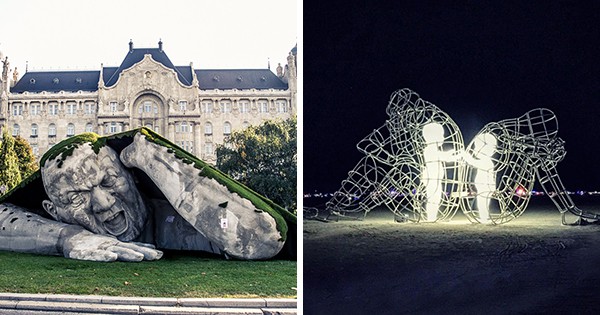 There’s a reason why we love looking at sculptures of famous people and things – they not only serve as a great piece of art, but also help us realize how much attention to detail goes into making these almost perfect replicas. The following compilation features some truly amazing metal sculptures from around the world that will surely get your attention. There are both famous statues and busts, as well as some lesser known sculptures that you might not be familiar with.

#4. The Force Of Nature by Lorenzo Quinn.

#8. Break Through From Your Mold by Zenos Frudakis, Philadelphia, Pennsylvania, USA.

#21. Ocean Atlas: Massive Underwater Statue Of Girl Carrying The Ocean On Her Shoulders.

#23. The Shoes On The Danube Bank by Can Togay & Gyula Pauer, Budapest, Hungary.

#24. The Monument Of An Anonymous Passerby, Wroclaw, Poland.

#27. People Of The River by Chong Fah Cheong, Singapore.

#33. And finally, these amazing metal sculptures by John Lopez

A professional bronze sculptor, Lopez initially fashioned a gate for a family cemetery from bits of scrap metal he found on his uncle’s ranch, which was 35 miles away from town.

After using extra metal to make an angel perched from atop the metal gate, he felt so much satisfaction from his work that he decided to make some more, and make them big.