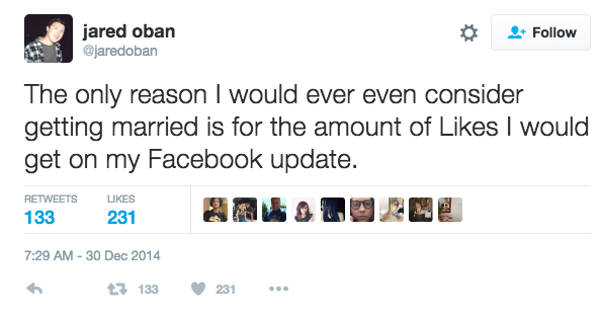 Just when I started to feel like being single wasn't that lonely… pic.twitter.com/Q2JH2pEKwm

The only reason I would ever even consider getting married is for the amount of Likes I would get on my Facebook update.

SOMEONE ON A DATING APP JUST ASKED FOR MY NUMBER AND I ACCIDENTALLY GAVE THEM MY MOMS. DELETING EVERYTHING INCLUDING MYSELF BYE

A man fixing your computer is the new chopping firewood; makes a lady feel safe and warm. #Swoon

A dude just told me his snapchat name then dabbed at me as he walked away. Is this dating in 2016