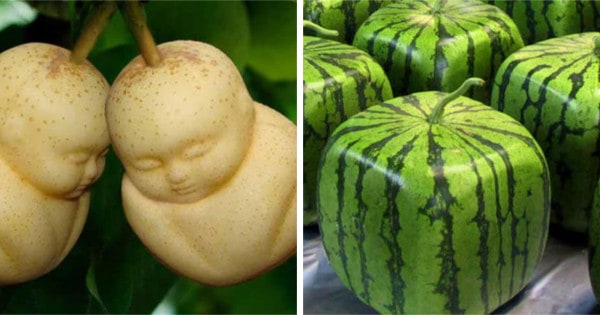 You might not think of fruit when it comes to dreaming up luxury foods (caviar, anyone?), but it turns out there are some seriously expensive fruits out there, from arty bananas to posh pears. The last one may surprise you.

These Buddha pears will make you immortal when eaten, according to legend. They’re grown in special moulds to give them their unique shape, and will set you back $8 each.

These are Sekai Ichi Apples, which translates as “World’s number one”. They’re a whopping 15 inches around and weigh up to 2lbs.

They’re considered the most expensive and biggest apples in the world and a single apple costs $21.

Taiyo no Tamago mangoes, which translates to “eggs in the sun”, are egg-shaped mangoes grown in Japan. The highest price ever paid for a pair of these unusual mangoes is an unbelievable $3,000!

This pineapple might look ordinary, but it was grown in the Lost Gardens of Heligan in the UK and a single one will cost you $1,600.

The pineapples are grown in mud structures filled with rotting manure, which makes the fruit grow super fast and keeps them ripe, and it’s the only garden in the whole of Europe that can grow pineapples.

The most expensive pineapple ever sold from the Lost Gardens of Heligan was an unbelievable $15,000!

This ordinary-looking orange is in fact a Dekopon Citrus, thought to be the sweetest orange in the world, and these mandarins aren’t small — they’re the size of a softball.

These Semikiya Queen strawberries are completely red and said to be “the most beautiful” strawberries in existence, with perfect green leaves and white seeds. Oh, and it’s $85 for 12 of these tasty berries.

These crazy square watermelons are grown in special square boxes in Japan and can weigh up to 13lbs.

They taste like regular watermelons, but the people who buy them typically use them as decorations. At $800 for one watermelon, they’re not exactly a cheap snack.

These Japanese grapes are Ruby Romans, or table grapes. They’re roughly the size of a ping pong ball.

A single bunch of these giant grapes will cost you $4,000, compared to just $3 for a pound of regular grapes.

This Densuke Watermelon comes from (you guessed it!) Japan and, as well as being almost black, is bigger than an average watermelon.

And finally, a banana, duct-taped to a wall. It was sold for $120,000 from Art Basel Miami Beach. It seems like anything passes for art these days…

But if that wasn’t strange enough, the banana was later eaten by another artist, who said he was hungry!