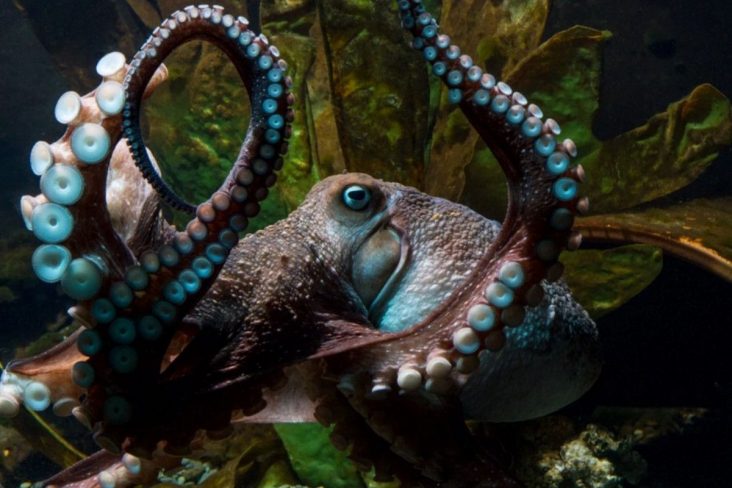 Impressive displays of hyperintelligence among animals have been well-documented. But are they smart enough to someday climb to the top of the food chain and overthrow the human race? You be the judge:

#1. Octopuses can escape almost anything.

Quite possibly the most intelligent invertebrates, octopuses are able to navigate their skeleton-less bodies through tight spaces with ease. In some cases where there is no hole to go through (as in the video above), these cephalopods use their ingenuity to make one. They've also made headlines for wreaking havoc in marine aquariums. And we said having an opposable thumb was an evolutionary advantage?

Leafcutter ants, as their name suggests, carve up foliage and march in a convoy back to deliver their harvest in order to farm fungus, which they eat — making them essentially mushroom farmers. In the same way we herd cattle and milk cows, ants also have colonies of aphids they keep by as a ready source of food. These herder ants shelter the aphids from the rain and protect them from predators like ladybugs. In return, they take milk from the green creatures by tickling them with their antennae. And just like how we slaughter the cows we milk, ants also sometimes eat the poor aphids.

Which makes you wonder, what else have animals been practicing for millions of years that we humans have yet to invent?

#3. Elephants are the world's original pharmacists.

Once again, the animals are several steps ahead of us. Zoopharmacognosy, or “an animal's knowledge of medicine” is the term used to describe animals' long-held practice of sourcing medicinal materials from their natural surroundings. Some examples: elephants have been known to engage in geophagy (eating dirt) to neutralize toxins from plants, exercise their own version of midwifery by using the Boraginaceace tree to induce labor, and managed to save their species from near-extinction by consuming ganoderma, now commonly used in Chinese medicine as an anti-cancer and anti-viral agent. These practices all began at a time when mankind was still trying to cure infections with mercury and magic potions from the town wizard. Thank goodness Hippocrates came along, or we'll all still be seeing shamans and healers instead of Dr. Drake Ramoray.

#4. Chimpanzees like to build armies and go to war.

A 10-year study of a chimpanzee community in Uganda led to an eerily chilling discovery. Scientists observed that every once in a while, groups of male chimps would assemble and head northward, silently and in a single file line. They would hunt the surroundings for signs of habitation from other tribes, such as feces, abandoned termite-fishing tools, etc. Enemy chimps that were found would be surrounded and murdered. It was not a single occurrence, either: it happened again and again, and when the scientists studied the pattern of the attacks, they realized that the chimps were at war. They were fighting over land with scary military precision. In the 10-year period of their research, the scientists observed 18 of these attacks which totaled in a loss of 13 rival chimpanzees (from a 100-strong tribe). Those numbers are crazy, American Sniper-type shiznits. And if you thought this was just some freak act of nature, a civil war of sorts was also witnessed in Tanzania where scientists saw one tribe of chimps split off from a larger tribe. The rebel chimps then executed a series of covert attacks in a five-year period that resulted in the destruction of the original tribe.

Recent tests were conducted on a group of brown capuchin monkeys to observe their ‘sense of fairness'. What scientists found was that monkeys had the ability to “go on strike”: when they saw other group members being given greater rewards (i.e., a treasured grape instead of a piece of boring old cucumber) they were likely to refuse to participate in routine tasks.

“In human terms it doesn't matter how hard you have to work for a million dollars,” said lead researcher Sarah Brosnan of Georgia State University in Atlanta, “But there's a pretty low cutoff point on what you'll do for five.”

Basically, Brosnan stressed, it did not matter whether they exerted more work or not. The response wasn't one of simple greed or wanting a better reward available; it was that they did not want someone else to get a better reward than they were getting for an equal amount of work.

So… first step, negotiating standards of equality. Second step, forming a government? That does not sound the least bit impossible.

#6. Fish are better businessmen than most people.

While it's quite easy to wrap our heads around the superior intelligence of monkeys (after all, they're kind of like a smaller, furrier version of people) the same doesn't ring true about fish. Everyone knows the joke about forgetful people having “the memory of a goldfish”, right? Certainly this applies across the board?

Well in the case of cleaner fish, it doesn't. These tiny mini-fish we see snacking on the sides of larger fish are not doing so out of spite, they're running a business. These fishes have a hangout spot where their “customers” could just drive by to get themselves cleaned (Car wash? More like Carp wash!) And these little dudes take their jobs seriously: if one of their cleaners accidentally bite a customer while nibbling the parasites off their scales, this wrongdoer would be taken to the side and punished.

These cleaners are so known for their services within the marine kingdom that their signature blue and yellow color has become both a uniform and a beacon. Much like how we would all know a building is McDonald's by the color and design of the facade. In fact, the colors are so associated with cleaning that if you could paint a regular fish blue and yellow and toss it into an aquarium, fishes would swim to it, expecting a cleaning. The animal kingdom, ladies and gentlemen.

#7. Bees are the math nerds of the insect kingdom.

Bumblebees can apparently solve a problem which makes supercomputers busy for days. The “Travelling Salesman” is an extremely complicated mathematical problem which computers decipher by comparing the length of all possible routes and choosing the shortest. But with zero computer assistance and even with a brain the size of a microdot, bumblebees can figure it out very quickly.

Dr. Nigel Raine, from the School of Biological Sciences at Royal Holloway explains: “Foraging bees solve travelling salesman problems every day. They visit flowers at multiple locations and, because bees use lots of energy to fly, they find a route which keeps flying to a minimum.” But the exact methods as to how they are able to do such a feat is still a mystery, as well as the exact extent of their knowledge. What else do they know? We might never find out.

#8. Homing pigeons have state-of-the-art navigation systems pre-built in their brains.

Although some of us might have had too-intimate encounters with their shit (literally) than we would have liked, homing pigeons' navigation systems make a TomTom look like a Kiddie Meal toy. Even if you blindfold a pigeon, take it to a deserted island, give it a fake name and a new identity, convince it that the rest of the world has turned into rubble, it would still find its way back to its nest. It's even been recorded that these birds could fly back home from distances of 1,100 miles. F*ck. There's some weird magic shit going on here that some scientists attribute to pigeons being able to read the Earth's magnetic fields… although we all know they really are = aliens.

#9. Dolphins are infamous as mammals who care for others.

They have been seen rescuing other sea animals from dangerous situations that they themselves may get into as well, such as sharks or humans. Dolphins that perceive a human drowning will go to the human and try to help.

Dolphins also have been shown to cooperate with other animals. In Brazil, scientists have spotted dolphins cooperating with a catfish known as the Whiptail Catfish. The Dolphins will create a circle around the catfish and force it towards open waters were there is more food.

Dolphins also communicate by using click sounds, like bats do with echo location. Dolphins make these clicks to identify each other, along with the strength and spread of the click to show emotion. Scientists have even found that it may be possible for dolphins to use their natural sonar abilities without interference from foreign objects. They use this to see each other underwater, showing pictures of what is going on around them. Scientists are still learning about the mental process behind dolphins with their natural sonar abilities.

#10. Parrots are well known for their ability to mimic human speech.

However, new research has shown that they are capable of more sophisticated vocal learning than previously thought.

Scientists at the University of Vienna studied the behavior of eight parrots in an indoor aviary over six months and found parallels to the vocal development in songbirds. They demonstrated “surprising flexibility” in the parrots' vocal behavior, learning their songs from other birds instead of through imitation.

The study is the first to provide evidence that parrots are capable of dynamic vocal adaptation to social feedback, just as humans can.

“It may be that this capacity is even more widespread in species with complex social organizations”, said lead researcher Prof Irene Pepperberg. “We now know that parrots are far more like songbirds than we previously thought, and this has big implications for how these birds may be treated in the cage-free environments where many of them live.”