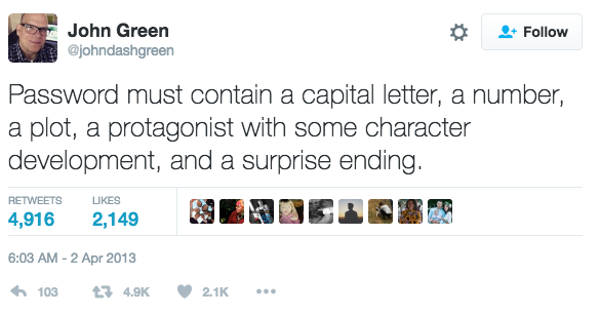 Amazon thinks my recent humidifier purchase was merely the inaugural move in a newfound hobby of humidifier collecting.

"murder" she wrote
"your password must contain at least one number and one upper case letter" the screen said
"murd3R" she wrote, frowning

Sorry but your password must contain an uppercase letter, a number, a haiku, a gang sign, a hieroglyph, and the blood of a virgin

Leaving my browser history open in case anyone in this coffee shop tries to steal my laptop when I'm in the bathroom. pic.twitter.com/IOo89Vypy7

me: How long are you going to keep throwing that in my face?!
Netflix: Because you watched "The Wedding Planner"

People are writing condolences on my Grandma's Facebook that sound more like Yelp reviews of her. Great woman, very loving, 5/5 stars

My aunt's ex-boyfriend's mailman's brother said it on Facebook so I don't think any further research is necessary.

When your internet goes out and you are forced to get to know your surroundings pic.twitter.com/nHYrLkV9IR

AMAZON: Did you buy a watch?!
ME: Yeah, it's-
AMAZON: You might want THIS watch!
ME: No I already-
AMAZON: ONLY WATCHES FOR YOU, FOREVERMORE

*turns on internet*
computor, i need to take a break from trying to achieve one thing. show me all of the achievments of others all at once

The new options on Facebook look like the life cycle of every relationship I've ever had pic.twitter.com/LOwqS3vF8w

Google isn't much help if you can't think of the word 'zebra' pic.twitter.com/mLa7mkWzCc

Password must contain a capital letter, a number, a plot, a protagonist with some character development, and a surprise ending.