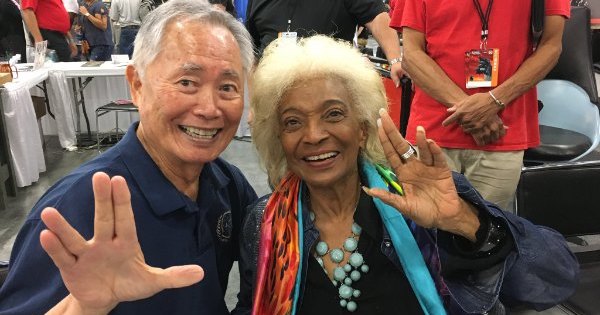 Kyle Johnson, her son, posted a message on the website Uhura.com saying, “I regret to inform you that a great light in the firmament no longer shines for us as it has for so many years .Her light, however, like the ancient galaxies now being seen for the first time, will remain for us and future generations to enjoy, learn from, and draw inspiration.”

As Lt. Nyota Uhura on the original TV series, Nichols made history as one of the first Black women to appear in a major television series. Her name is derived from the Swahili word for “freedom,” Uhuru.

In 2011, Nichols stated to NPR, “Here I was projecting in the 23rd century what should have been quite simple. We’re on a starship. I was head communications officer. Fourth in command on a starship. They didn’t see this as being, oh, it doesn’t happen til the 23rd century. Young people and adults saw it as now.”

When Uhura and Captain James T. Kirk (played by William Shatner) exchanged a passionate kiss in 1968’s “Plato’s Stepchildren” episode, Nichols gained notoriety. One of the first such television moments, their interracial kiss on the lips was revolutionary.

George Takei, who played helmsman Hikaru Sulu on Star Trek, tweeted: “I shall have more to say about the trailblazing, incomparable Nichelle Nichols, who shared the bridge with us as Lt. Uhura of the USS Enterprise. For today, my heart is heavy, my eyes shining like the stars you now rest among, my dearest friend.”

He also posted a photo of himself and his longtime friend flashing the Vulcan greeting, and the words: “We lived long and prospered together.”