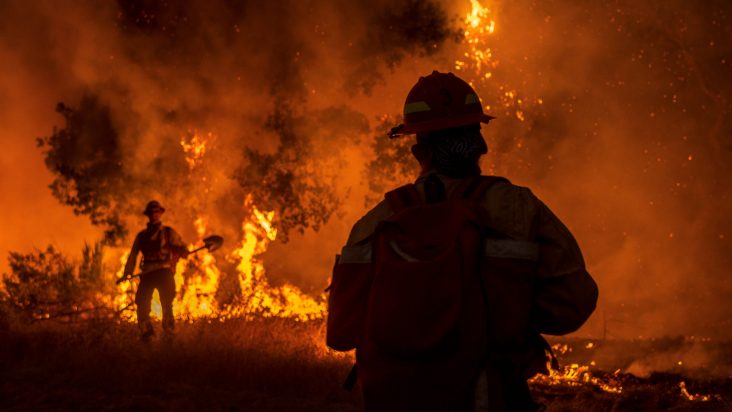 A wind-driven wildfire has forced the evacuation of several hundred homes and a hospital in the heart of northern California’s wine country.

The massive wildfire raging in Northern California is now the second-largest in state history. Officials said over the weekend that the fire scorched nearly one million acres.

The LNU Lightning Complex Fire is raging across five counties — Napa, Sonoma, Lake, Yolo, and Stanislaus — has spread to more than 325,000 acres. It was 15 percent contained.

Sean Kavanaugh, incident commander with the California Department of Forestry and Fire Protection said, “This entire LNU Complex is now the second-largest wildland fire in state history. The largest wildfire was the Mendocino Complex that burned more than 459,000 acres in 2018.”

The blaze has destroyed 845 structures and damaged 231 more.

President Donald Trump on Saturday declared that California is being impacted by a major disaster and made federal funds available to fire victims in seven counties.

“Thank you to the President for your partnership and granting this urgent Major Disaster Declaration. California is battling two of the largest fires in our history and has seen nearly 600 new fires in the last week caused by dry lightning strikes,”  Newsom said.

The National Weather Service issued a fire weather warning Saturday for areas from the northern Monterey Bay to the Point Reyes National Seashore north of San Francisco. Lighting could impact those communities Sunday into Monday.