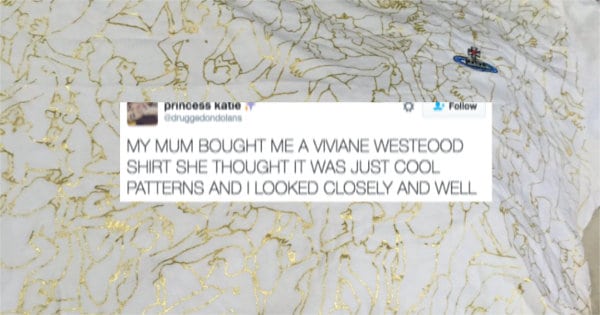 It’s tricky buying clothes for people — you have to be sure they’ll like it, hope that it fits, oh, and of course, it’s best to avoid having an incredible rude pattern plastered all over the garment.

16-year-old Katie was pretty pleased when her mom surprised her with a brand new Vivienne Westwood t-shirt — until she took a closer look at that pattern.

MY MUM BOUGHT ME A VIVIANE WESTEOOD SHIRT SHE THOUGHT IT WAS JUST COOL PATTERNS AND I LOOKED CLOSELY AND WELL pic.twitter.com/y3ywYpBHE3

And Katie’s Tweet quickly took off, with thousands of retweets within hours of her posting the hilarious photos of the shirt.

Katie has since told her mom that the Tweet (and the very rude shirt) went viral.

“She’s finding it hilarious,” said the teenager, “But she’s just as confused as I am, with why it’s getting so much attention.”

“I think she secretly knew and was just trying to wind me up but every time she looks at the shirt she just laughs hysterically.”

Not that it matters — Katie’s proudly wearing her now-famous t-shirt anyway.