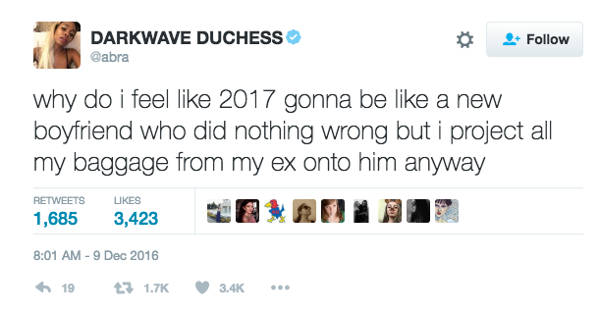 A visual representation of how i'm minding my business in 2017. pic.twitter.com/rYCkeWjxIc

Shouts to ppl excited for 2017 to start so they can meet the new person that's gonna waste their time, emotions and money

everyone dies in a nuclear blast

Robbie Williams anti bacing his hands after dancing with the audience is already the best moment of 2017 pic.twitter.com/JBr7XNBFba

May all the crimes you encounter in 2017 be only as serious as this one, out of Ireland: pic.twitter.com/O0JvKmXV5b

I worry going from 2016 to 2017 is going to be like killing Joffrey and then finding out Ramsey Bolton is taking over the Iron Throne.

2017 is first prime number year in six years so hopefully this means it'll be less divisive than 2016.