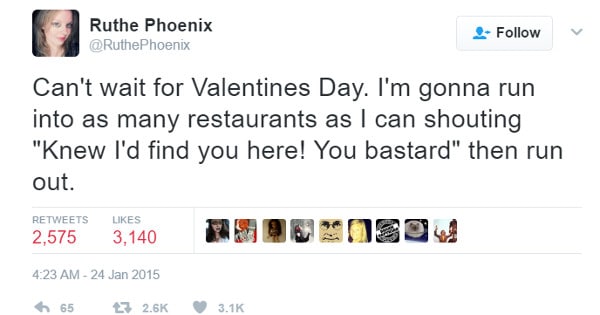 It’s that time of year again: loved-up couples hold hands and enjoy romantic restaurant dinners, while the rest of us make jokes about how lame Valentine’s Day is on Twitter. Here are some of the funniest.

Can't wait for Valentines Day. I'm gonna run into as many restaurants as I can shouting "Knew I'd find you here! You bastard" then run out.

I have a valentine, but she goes to another school. also she's modeling overseas right now.

You are never alone on Valentine's Day if you're near a lake and have bread.

This Valentines give her what she really wants: a throne forged from the bones of her enemies & a relentless reign of terror over the masses

Sending flowers to your significant other at work is a great way to tell all their coworkers that you used to have $60.