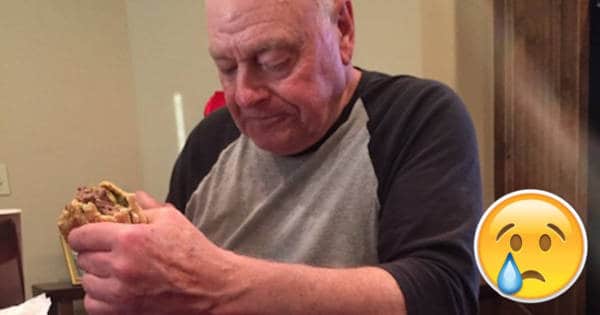 One girl’s Tweet about having dinner with her grandfather is going viral and breaking hearts around the world because of its gut-wrenching backstory.

Kelsey Harmon, from Oklahoma, posted this photo of dinner with “Papaw”, saying that he’d invited his six grandchildren over but Kelsey was the only one to show up.

“So I sit down and get a plate, but he waits because he wanted to make sure everyone else got plenty,” Kelsey continued, “Well about 30 minutes pass and he decides he’ll eat just one.”

“An hour goes by and nobody shows. I could tell he was disappointed … he even made homemade ice cream, our favorite as kids.”

Kelsey’s post got 70,000 retweets in under 24 hours as hearts around the world broke for Papaw.

Why couldn't they just show up to pawpaw's dinner pic.twitter.com/T2xZ7IqNaD

“[Papaw] is always trying to make sure we all stay close to him and close to each other,” says Kelsey, explaining that Papaw had hoped to see all his grandchildren as they were around for spring break.

As the story developed, it didn’t take long for the wrath of Twitter to be directed at Kelsey’s Papaw-abandoning cousins.

when u see one of the 5 grandkids that didn't eat with pawpaw pic.twitter.com/EmHGiy1k5Q

Until, bowing to pressure, Kelsey’s cousin Brock tweeted that he’d been to see Papaw (and had burgers).

GUYS DON'T WORRY!!!! I CAME TO PAPAWS HOUSE AND AM HAVING A BURGER!!!!!!! pic.twitter.com/2EHVllGG2U

We love a happy ending.