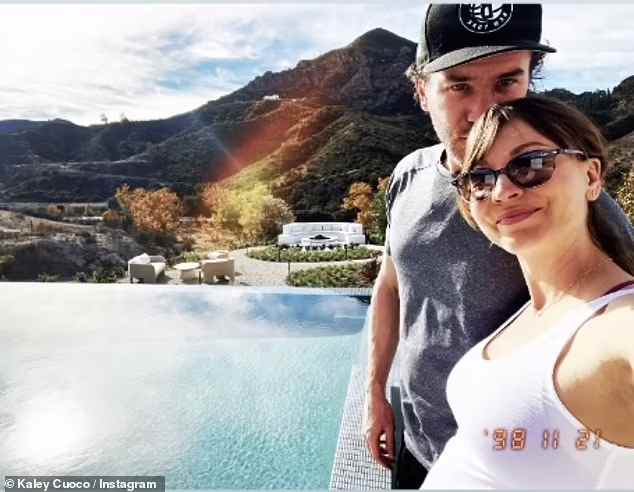 The Flight Attendant actress is nearly halfway through her pregnancy, which she revealed in early October.

Cuoco sported wide, black sunglasses in the pair’s photos enjoying some fresh air beside a pool.

Tom was dressed in a charcoal gray t-shirt and black Adidas track trousers with white stripes down the legs. He kept the light out of his eyes by wearing a black Brooklyn Nets hat and dark footwear.

She used the hashtag ‘#nofilter’ along with a solitary shot as she posed against a wall with a mountainous backdrop.

A large pool was visible in the content, and in one photo with her beau, she used a GIF that said ‘feels like heaven on Earth.’

Earlier in the day, the TV personality shared behind-the-scenes footage from her show’s set.

A friend dragged the California native in a red wagon with a tiny dog.

Kaley captioned, ‘This is how I now travel to set. Pregnant and working.’ She then tagged a stylist as she added, ‘Sorry @jayde_moon did I mention I’m also hungry? lol.’

The stunning lady donned a denim chambray blouse and had her glossy hair in a high ponytail.

They married in December 2013 and divorced less than two years later in September 2015.

In June 2018, she married equestrian Karl Cook, and they announced their divorce in September 2021.