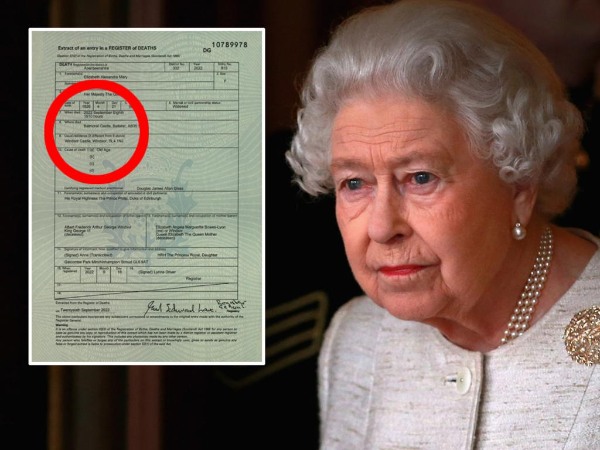 According to Her Majesty’s recently released death certificate, the Queen passed away due to “old age.”

The 96-year-old monarch passed away at Balmoral Castle on Thursday, September 8, at 3:10 p.m., more than three hours before the general public was informed and before some of her children and grandchildren could reach her bedside.

Her death is listed as caused by “old age” on the death certificate, which was made public by National Records of Scotland. This is the same cause of death listed for Prince Philip in April 2021. Princess Royal, Princess Anne of Queen Elizabeth II, was the one who broke the news of Her Majesty’s passing.

The 3.10 pm time of death on the historical document, which specifies the monarch’s occupation as ‘Her Majesty The Queen’, shows that only King Charles and his only sister were by their mother’s side when she died in Aberdeenshire three weeks ago today.

Additionally, it has proven what many of the Queen’s children and grandchildren sought in vain to be with her during the late monarch’s final hours on that awful day.

When the Queen died away, Prince William, Prince Andrew, Prince Edward, and his wife Sophie Countess of Wessex were in the air. In 2.39 p.m., they took off from RAF Northolt in South Ruislip, west London, and arrived at Balmoral an hour later.

Prince Harry was not on the plane with his brother and had to make his journey to Scotland on a jet from Luton, after his grandmother had died. At 6.46 p.m., 16 minutes after the Palace’s statement, he touched down in Aberdeen.

It is said that Douglas James Allan Glass is a certified qualified medical professional. Dr Glass is a GP from the Highlands hamlet of Aboyne, roughly 20 miles from Balmoral.

Old age was the only cause of death, with no other contributing factors. The cause of death was the same as that listed on the death certificate for her husband, Prince Philip.

The Queen’s passing was reported in Aberdeenshire on September 16, 2022, according to Paul Lowe, the Registrar General for Scotland.

When paying tribute to her mother, the Queen, Princess Royal revealed she was with the head of state in her last moments.

I was fortunate to share the final 24 hours of my dearest mother’s life, said Anne, who accompanied her mother’s coffin on its journey from Balmoral to London via Edinburgh.

The princess is designated as the ‘informant’ on the paper and would have alerted the local registrar of her mother’s death.

The Queen’s family raced to be by her side in the hours leading up to and following her passing.

Princess Anne was already in Balmoral and has been carrying out public engagements.

King Charles flew in a helicopter to be with Queen Consort Camilla in her final hours while she was in Dumfries, Scotland, while he was also in Scotland.

The rest of the Royal Family was in the southeast and in London.

William travelled with his uncles Andrew and Edward and his Aunt Sophie, Countess of Wessex. It appears they were in the air from RAF Northolt to when the Queen died, having taken out from London at 2.39pm, arriving roughly an hour later.

Around five o’clock, William took the wheel, and they arrived at Balmoral. On a solo trip from Luton, Prince Harry arrived roughly 16 minutes after the world learned of the Queen’s passing at 6.46 p.m.

Aides at Buckingham Palace responded strongly ten days ago to allegations that Harry had only had five minutes warning of his grandmother’s passing before it became public.

It followed a tabloid article that said the distraught royal was the last person to learn of her dying; his father even informed him after Prime Minister Liz Truss at 4.30pm.

The prince’s decision to resign from his royal responsibilities and make many charges about how he and Meghan were allegedly treated, according to reports, has caused a gap in his family. This incident may be another illustration of that rift.

But the fact that such reports had surfaced on the night of the Queen’s burial, which was viewed as extremely disrespectful under the circumstances, infuriated Buckingham Palace.

A spokesman for the King emphasized in a rare statement on such a private matter that “the public was only informed after every family member had been informed.”

This occurred because he was en route to Scotland and was, therefore, inaccessible.

His father had rung both him and his brother, William, earlier in the day to tell them to get up to Scotland as quickly as possible as their grandmother was rapidly fading.

Then, he went back to the Queen’s side.

After she died, he insisted on personally ringing them again to tell them the news that she had peacefully passed away at Balmoral before aides conducted the necessary business of informing the Prime Minister that the country’s head of state had died.

Charles personally insisted that the information not be made public until he had a chance to personally inform his youngest son while Harry was in the air. The country was then given access to a statement.

The Queen’s children and grandchildren attempted in vain to be with her during her final hours, as was initially suspected, according to the death certificate.

William drove his uncles, the Duke of York and Earl of Wessex, who was joined by his wife, from Aberdeen airport to Balmoral, arriving shortly after 5 pm, while the Duke of Sussex was taken through the gates sometime later.

Professor Sir Huw Thomas, Head of the Medical Household and a former doctor to the Queen, was in charge of maintaining the Queen’s health.

The late monarch’s cause of death was certified by Dr. Douglas Glass, who held the title Apothecary to the Queen and served as Charles’ doctor in 2019 during his official visit to Germany.

Old age is admissible if the doctor certifying death had cared for the patient for a long time, was unaware of any sickness or injury that led to death, and witnessed a progressive decrease in the person’s general health and functioning.

During her latter years, the Queen experienced intermittent mobility issues and frequently used a walking stick in public.

The health development occurred after the head of state was surreptitiously sent to a private London hospital for “preliminary checks” in October last year – her first overnight hospitalization in eight years.

The monarch was soon back at her Windsor Castle desk but spent the following three months on physicians’ orders to only undertake minor tasks and missed many significant events, including the Cop26 climate change summit in Glasgow and the Festival of Remembrance.

The Queen, who was spending her summer vacation at Balmoral following tradition, asked Liz Truss to form a government and serve as her 15th prime minister just a few days before she passed away. This was one of the Queen’s most important official duties.

After serving the country for 70 years, the Queen was put to rest on September 19 after a heartfelt farewell by her loved ones, friends, and the whole country.

For the lady who was never supposed to be sovereign, the Queen fulfilled her vow to serve the nation and Commonwealth and came to win the respect of many – from international leaders to the people.

A modest but public memorial, her funeral and burial took place over a lengthy day, and during it, her heartbroken family marched behind the coffin. King Charles III, who shortly after left for Scotland and has since remained there with his Queen Consort, couldn’t hide his sadness.