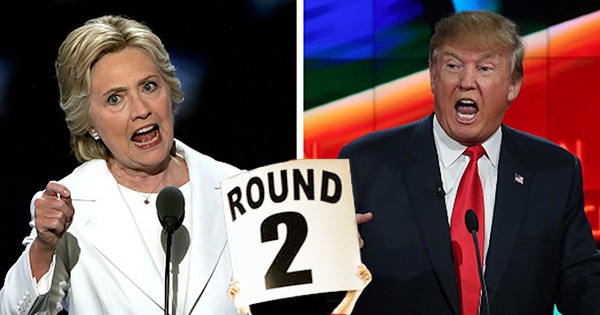 Hillary starts the next debate with "Sorry Donald, your hands are too small to grab this pussy" then dances for 90 mins

THEY POSTED WESTWORLD EARLY BECAUSE OF THE DEBATE CANCEL ALL PLANS

Maybe @realDonaldTrump can use the mic from the "Billy Bush" interview at the next debate. Seems like it was working pretty well

TRUMP: i sexually assault women and see no issues with it
UNDECIDED VOTER: i dunno, hillary seems untrustworthy
GARY JOHNSON: let me debate

I just imagined a debate moderator yelling “FINISH HIM” to Hillary Clinton like in Mortal Kombat.

Next debate will feature an audience of undecided voters to ask questions. If you're undecided at this point, I have some questions for you.

So, if I had to guess, I'd say on Sunday night, people will argue about who won the debate because reality has given up.

*Sunday debate*
Cooper: What is your plan to defeat ISIS?
Trump: Grab em by the pussy
Cooper: Huh?
Trump: I'm a star I can do anything Coop

on bright side for Trump, less pressure on Sunday's debate since stakes have gotten somewhat lower