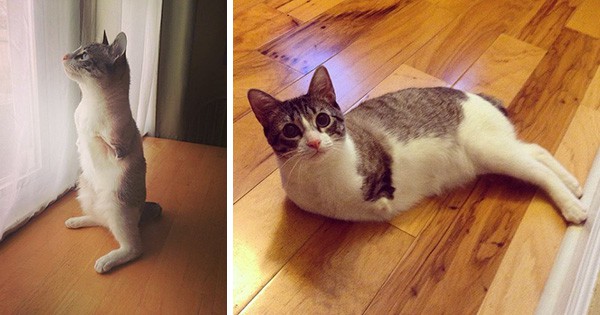 Of all the fabulous felines on the internet, this little rescue stands out. Her name is Roux, and she is a very special kitty, indeed. 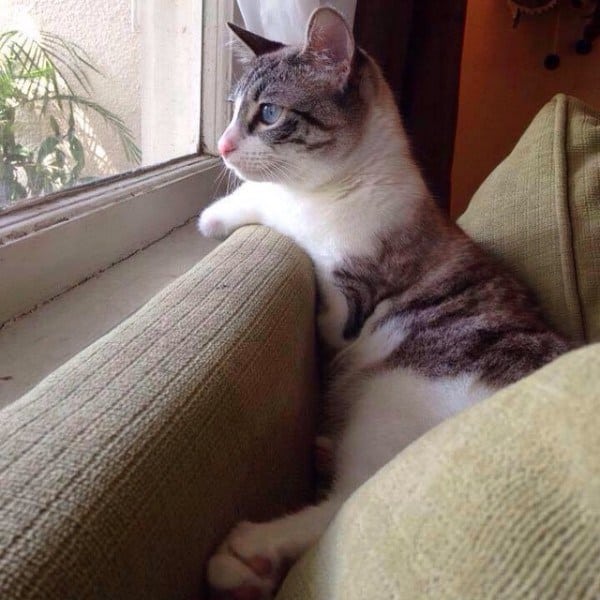 You see, Roux was born without front legs. But remarkably, this hasn’t stopped her from living a normal life. 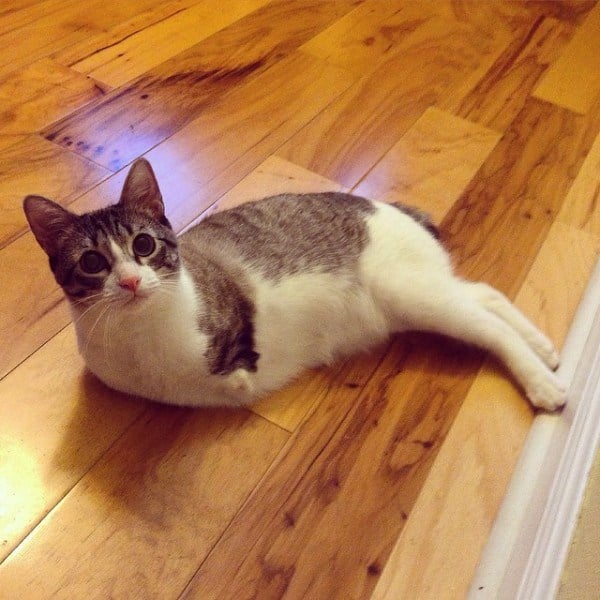 The absence of Roux’s front limbs is due to a congenital abnormality. It stops her from being able to bury her poop, which was the reason she was surrendered to an animal rescue shelter early in life.

That was where she met Jackie Deak Akey, who adopted her and took her home. 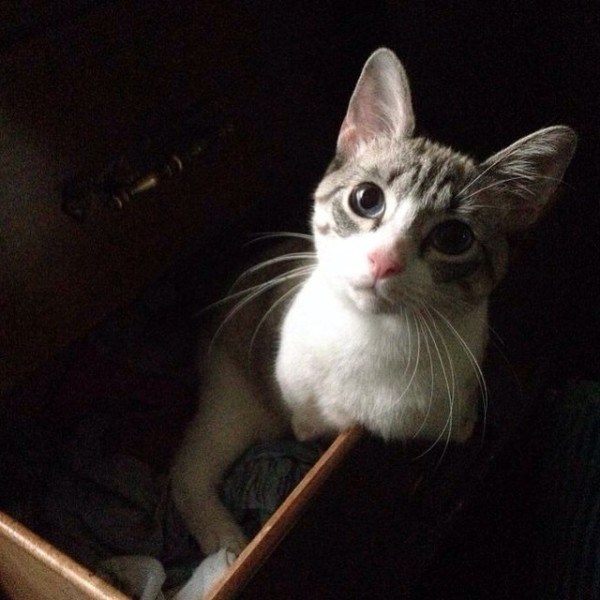 “When I saw her it was absolutely love at first sight,” she said.

Roux’s full name is Lil’ Bunny Sue Roux Hendrickson Deak Akey — a mouthful for a little kitty, but Jackie is quick to explain why. 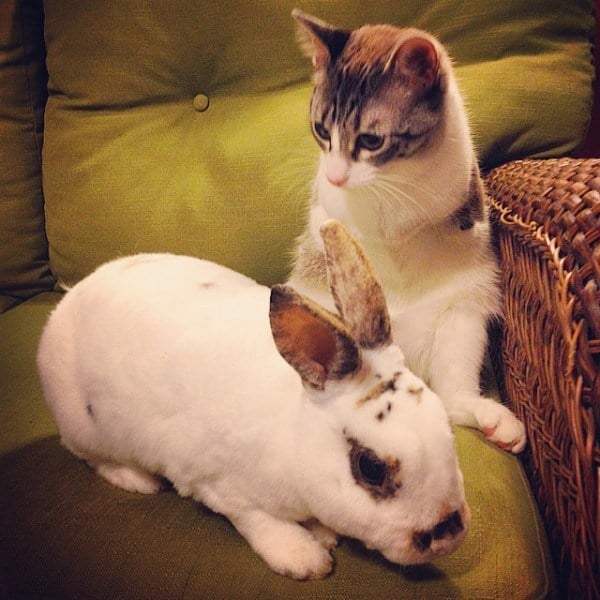 “Lil’ Bunny because she hops like a bunny. Sue, because she moves like a T. Rex and Sue is the nickname of the the largest, most extensive and best preserved T. Rex specimen ever found, residing at The Field Museum in Chicago (where I’m originally from). Sue was discovered by the paleontologist Sue Hendrickson. Roux is short for kangaroo because she leaps like one and the Roux spelling is a New Orleans twist (and I already have a bunny named Kangaroo!).”

Roux’s extraordinary abilities have since had her bunny-hopping straight into the hearts of thousands of people.

She can run and jump around just as well as any cat.

“When she wants to move quickly or play, she hops with both back legs in unison like a rabbit. She can move very fast when she wants to!” Jackie said.

Roux also has more than her fair share of ninja moves up her sleeve.

“She has a few favorite toys and picks them out of the toy box herself and flings them around with her mouth since she can’t bat them around. It is incredible to watch her adapt, even though to her she is purrfectly normal!”

“Roux at times can be very independent, with an ‘I can do it myself!’ cattitude, but other times she doesn’t mind a helpful assist.”

What Roux lacks in the leg department, she makes up for with her big voice at mealtimes! 💗🐾🔊

While it certainly seems that Roux is thriving despite her handicap, there are some concerns about her mobility as she continues to grow.

“There is potential for back problems as she grows older since she moves differently than a cat normally would, but as of now her X-rays look healthy,” Jackie said. 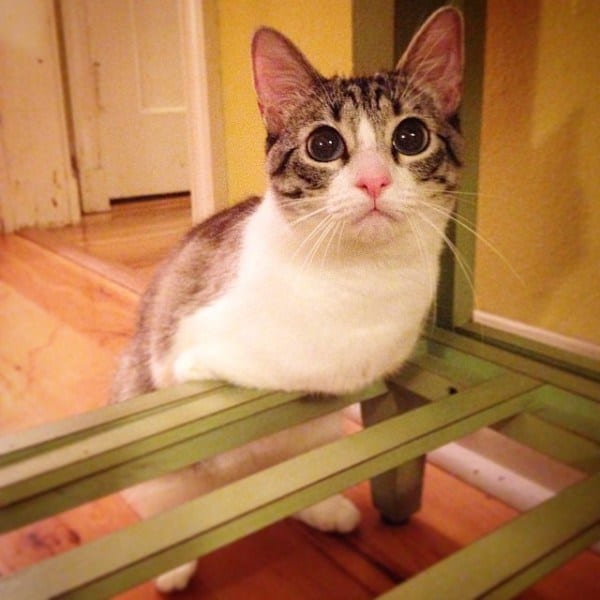 “Since she is quite active and mobile without the use of prosthetics, it does not appear that she needs them at this point. Her back legs are quite strong and she can leap impressively high! I do plan on having her evaluated by a veterinary orthopedic specialist as she gets older.”

“Roux is healthy and happy, and there is no reason to feel sorry for her. I can understand it can be shocking at first to see that she doesn’t have front legs, but once you watch what she can do and accomplish with what she does have, you will be impressed and inspired. She is just too wonderful and inspirational to keep to ourselves,” Jackie said. 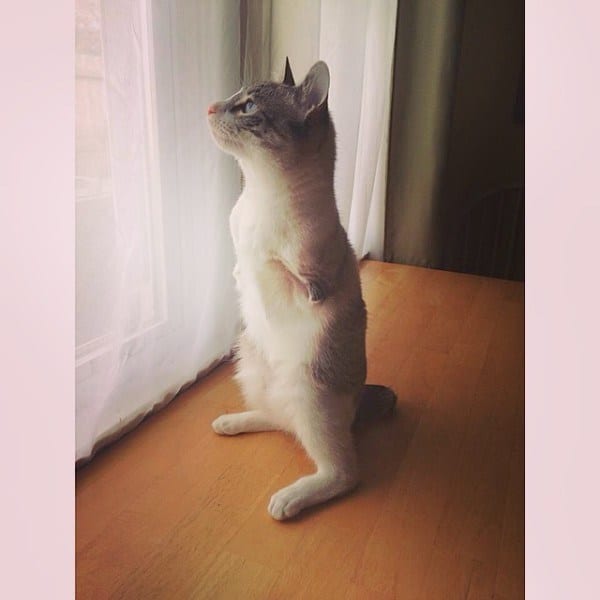 “There are so many wonderful cats in animal shelters that need loving homes. And certainly don’t overlook the special needs kitties! We are so grateful little Roux is in our lives.” 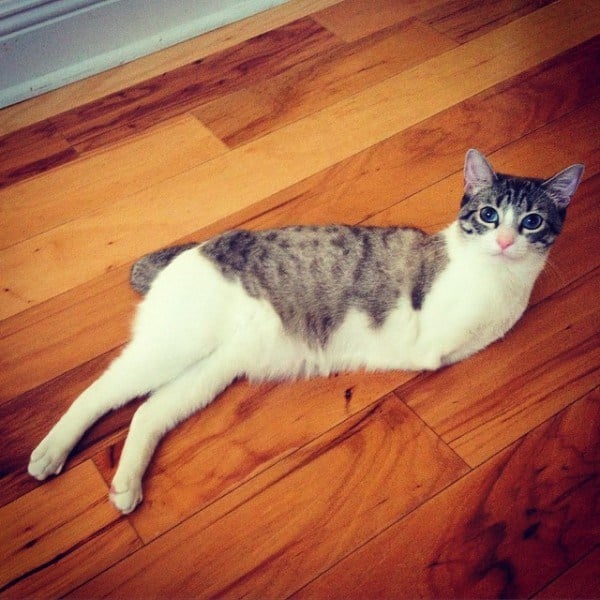 Truly, we can’t get enough of this ‘bunny cat’!