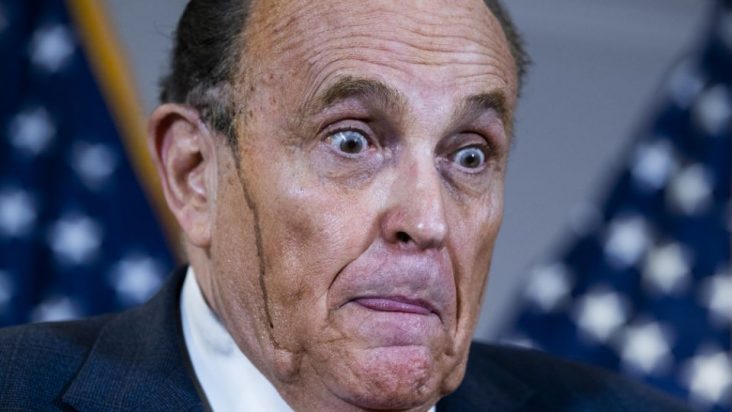 The Trump legal team’s explosive press conference on Thursday was sidelined by presidential lawyer and former New York City Mayor Rudy Guiliani’s profuse sweating. It would not have been noticeably, had the sweat not been black from what appeared to be hair dye.

As Giuliani sweated in front of journalists, streaks of what appeared to be dark hair dye began to run down his face.  Minutes after, the internet was abuzz with comments and tweets.

According to reports, the audio feed from the press conference included unknown persons asking “Can they hear us on the stream?” and discussing “Rudy’s hair dye dripping down his face”. The feed was later removed.

At the press conference, Giuliani attempted to reprise a scene from My Cousin Vinny, an Oscar-winning comedy from 1992.

He asked reporters, “Did you all watch My Cousin Vinny? You know the movie? It’s one of my favorite law movies, because he comes from Brooklyn.”

“And when the nice lady said she saw …” Giuliani said, switching into a very rough approximation of Pesci’s Brooklyn accent. “And then he says to her, ‘How many fingers do I … How many fingers do I got up? And she says three. Oh, she was too far away to see it was only two.

“These people [the poll observers] were further away than My Cousin Vinny was from the witness. They couldn’t see a thing,” he added, relating the movie to the Trump campaign’s claims about the problems faced by poll observers in Philadelphia.

The former mayor then addressed the press, saying, “I don’t know what you need to wake you up, to do your job and inform the American people, whether you like it or not, of the things they need to know!” he said. “This is real! It’s not made up! There’s nobody here who engages in fantasies.”