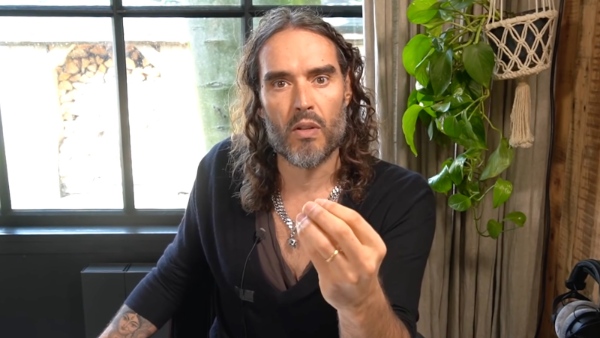 Controversial comedian Russell Brand moved from YouTube to Rumble after one of his videos was allegedly “censored” for disseminating false information about Covid.

The 47-year-old actor said in a video posted on Tuesday that he is going to Rumble, where he would be live streaming weekdays for an hour, in response to the removal of his video regarding the “shifting narratives about COVID.”

‘We have been officially censored by YouTube,’ Brand explained.

Russell shared that a previous clip he posted on the site was taken down because he ‘cited information on official government websites, which we misinterpreted’ regarding Covid.

In a later deleted second video, he expressed regret and acknowledged he had made a mistake.

‘We made an error, in my opinion a relatively small error, and we’re being penalized.’

Brand then presented a tape dated March 2021 of MSNBC’s Rachel Maddow declaring, ‘today we know that the vaccines work well enough that the infection ceases with every immunized individual.’

He made a note of the fact that the clip was still available online and lacked a COVID fact check.

He stressed that everyone knows now that the ‘truth is the vaccine does not prevent you from spreading it,’ yet that video is still on the site.

Russell continued: ‘So we’re asking: Is there one standard for independent news broadcasters like us on our channel and a different standard for what we would call the ‘mainstream media?

‘Why are independent channels being attacked, censored and brought down while mainstream media channels are being pushed, highlighted and celebrated?

The major streaming service said that his account had been suspended because it had violated its community standards.

Former US President Donald Trump and his supporters, who have been banned from YouTube, are hosted by Rumble.

Brand joins MAGA fans, Alex Jones and the ex-son president’s Don Jr who are already on the site.