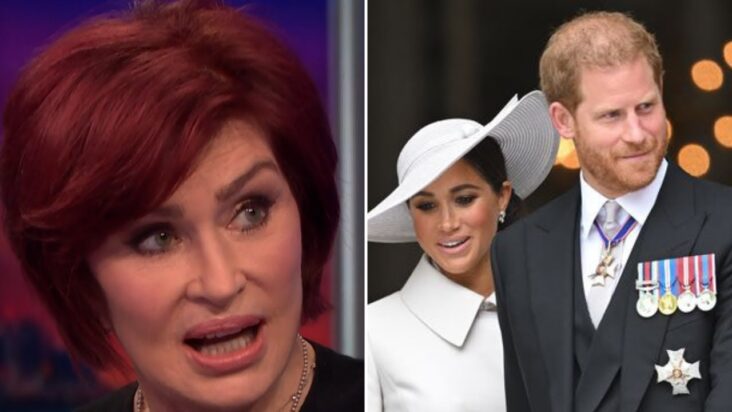 Sharon Osbourne discussed her termination from CBS’s “The Talk,” claiming that it happened due to her criticism of Oprah Winfrey’s royals interview in private as not being “genuine”.

The 69-year-old TV personality claimed that there were other reasons for leaving the daytime talk show besides that she had defended Piers Morgan’s remarks regarding Meghan Markle in the Oprah interview. In addition, she had expressed her opinion to others in the studio that the Winfrey presentation was “s***.”

Top network executives, notably the head of programming Amy Reisenbach, were delighted with the Oprah interview, she told the source, and hearing otherwise allegedly didn’t sit well with them. She went on to explain.

“They [CBS executives] were initially pissed with me because I was saying the [Oprah broadcast] was s***,” Osbourne explained. “Just to people at the studio. I didn’t feel it was genuine. I had supported Piers [in defense of his] freedom of speech because he’s a journalist.”

Osbourne had shown support for a friend Morgan who had made a statement regarding Markle’s Winfrey interview where she accused the royal family of racism, which sparked a heated disagreement between Osbourne and her former co-host Sheryl Underwood in 2021.

Following Markle’s charges, Morgan claimed he “didn’t believe a word that comes out of” Markle’s mouth following her accusations.

“The Talk” went on a little break, but it wasn’t long before rumors circulated that Osbourne wouldn’t be returning to the program. Osbourne eventually apologized.

There was no proof, according to CBS, that any network executives started the on-air altercation between Osbourne and her co-hosts.

Sharon Osbourne, the wife of rock star Ozzy Osbourne, stated she is prepared to move over what transpired on the daytime program during an upcoming Fox Nation docuseries called “Sharon Osbourne: To Hell & Back.”

“I learned a lot through [getting canceled] but you are who you are,” Sharon explained. “I am not a racist … never said one racist thing. People are woke, it’s a whole different world out there. People conduct themselves differently now.”

“It’s scary when you can say one thing, and it gets distorted, or people don’t understand the context,” she added.