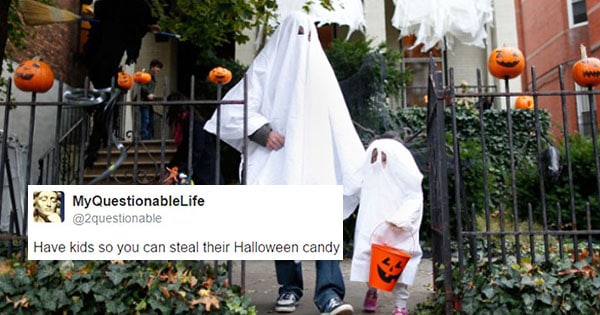 Take a break from the recent news on murder clowns and the nightmare of elections and scroll on down for some funny mom tweets about every sugar-driven toddler’s favorite time of the year: Halloween!

Funny how everyone at my son's school is commenting on my zombie costume when this is just what I look like now.

Parents on Halloween: Take candy from strangers. In the dark. And share with me.

— Walking Outside in Slippers (@WalkingOutside) October 19, 2016

Want to enhance your Halloween experience? Have a baby! My nine-month-old really adds to the season's spooky vibe by CONSTANTLY SCREAMING.

People should talk more about the perks of having kids, like leaving a legacy and eating the excess candy from every holiday.

Heard a Trader Joe's commercial advocating substituting carrot sticks for candy on Halloween, and I'm disgusted by what society has become.

I really want to scare the shit out of my husband this year so I'm debating dressing as a clown or handing him a positive pregnancy test.

It's cute how we pretend we get "free" candy for Halloween, as if we didn't spend a ton of money on costumes and candy to give to strangers.

My daughter wants to be something scary for Halloween this year so she's going to carry a school fundraising packet to every door.